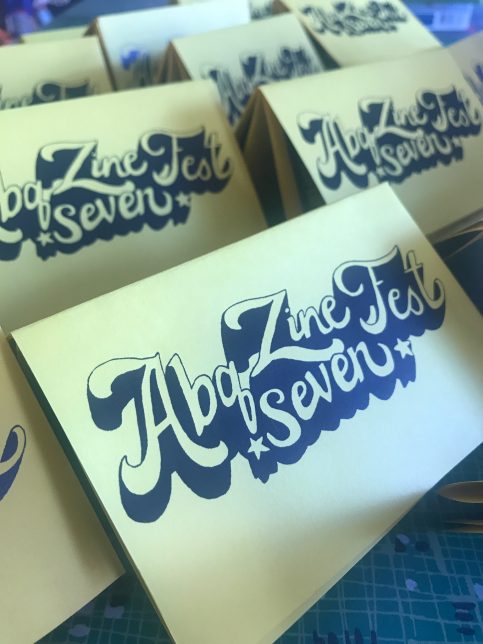 I have been scouring the soggy, ink-smudged paper archives in my brain, trying to come up with another article on zines. All of the zine interviews, workshops, library and zine fest visits I’ve been to merge into one big ball of paper pulp thoughts. Zines are self-published works, usually hand-made and assembled, then printed on a copier and distributed by the maker! Zines can be about whatever you want them to be about. Don’t call it a comeback! The great pamphleteers of old! Zines are important. Bla, bla, bla.

The truth is, I haven’t managed to get to bed before 3am in six weeks because I’m not just a client, I’m a member. I am a zine fest organizer. I’ve been doing this for a while now, every first weekend in October for seven years. Before my co-producer Liza Bley came along, I did 98 percent of the organizing work on my own. Year One felt like fun. ABQ Zine Fest launched at Harwood Arts Center with about 11 exhibitors, and it felt like a triumph! This year, the fest returns to its first home with nearly 50 exhibitors from Albuquerque and around the nation.

The world needs zinesters. We are literary time travelers. We document the future so that you know what’s coming.

Making a zine fest happen should be considered a small feat of engineering, like a paper version of the Baths of Caracalla or a cardstock Stonehenge. Basically, making a zine fest is like creating a micro-city for 7 hours, and hopefully a better world than the one you live in and navigate every day — but this year feels different. This year feels like a critical mission to accomplish in this groggy but stumbling-towards-consciousness, “woke” world.

The question arises: WHY make these tiny, DIY worlds? There are so many fests happening all the time: Why are zines, and the fests that celebrate them important? People are dying in hurricanes, getting slaughtered by police for existing, being beaten for trying to vote, murdered for being non-binary, told to get back in their place when they take a knee. Why are we working so hard to create a one-day event when in the grand scheme of things zines are dead trees, and our world is dying as well? I give you one good reason to make a zine and to have the courage to host a zine festival:

Zines are rife with the possibility of revolution.

Maybe it’s time to remember what zines can really do, and what bastions of resistance zine fests create. Zine fests make small cracks in the foundation of authoritarian, nationalist, dictatorial power that hides under progress of the digital age. Make zines and make zine fests because the information typed or scribbled on the pages within can give you life in a combustible world. Because 250 years ago, black literacy was a threat to the system of oppression known as slavery and white supremacy. I could have been subjected to 20 lashes with a whip or worse, or imprisoned for teaching someone else to read.

I write zines because in the 1890s, investigative journalist and suffragette Ida B. Wells Barnett had her printing press destroyed after she raised $500 to research and write her pamphlet, Southern Horrors: Lynch Law in All Its Phases.

I make zines because anti-Nazi activists Sophia Magdalena Scholl and her brother Hans were executed by guillotine for creating and distributing leaflets (zines, goddamit) that warned German citizens of the horrors about to befall the entire world.

I make zines because we all laughed when a misogynist, racist bigot decided he wanted to be president. We aren’t laughing now. If we aren’t vigilant, we may soon be too scared to speak out at all, and the silent smuggling of pamphlets in the dark might be our only method of thought-sharing once again. Sorry, too bleak? 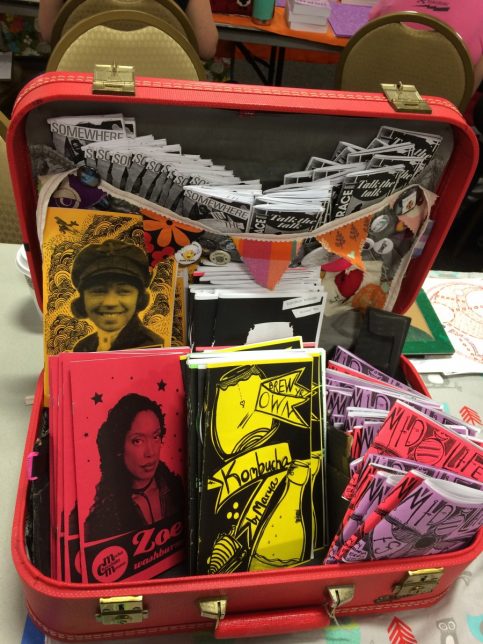 Look, the world needs zinesters. We are literary time travelers. We document the future so that you know what’s coming. We call out a warning, tucked in a collage, or a story wedged in a document people keep sticking an apostrophe in front of, like it’s the magazine’s little sister.

But there’s nothing diminutive about zines, or zine culture. Zines are a mighty movement — glacial and obsolete to some, but still moving forward, and a much bigger movement than the literary iceberg suggests on its surface. If you’ve grown out of zine-making, it’s probably because you yourself have become stagnant, not this literary format or this movement. So find your voice! Find yourself again and start a revolution of your own.

As serious and heavy as life seems right now, when you attend ABQ Zine Fest at Harwood Art Center this weekend, you’ll find all the things that define a contemporary festival: multitudes of zines to choose from, access to free workshops, panels, demos, a kid’s corner, food trucks. These are all things that inspire a good time, including picking up that zine about someone’s adorable cat. (We need those zines, too!)

But dare to seek out voices that might be different than yours. Find that zine striking at the heart of systems in need of dismantling and rebuilding. Grab like a precious object and clutch to your chest that zine that offers you a challenge to take a look at the world with fresh “woke” eyes, and seek out a zine that can give you tools and tasks you can use to change it.

In its 7th year, ABQ Zine Fest (ABQZF) is the first and largest festival in New Mexico for zine makers (zinesters) to meet, exchange and discuss their work with the public, and to form new creative collaborations, yielding further artistic exploration.

ABQZF is community-accountable and fosters a non-competitive, diverse, queer-friendly, creative environment for zinesters in the city of Albuquerque, a working-class, multiethnic, strongly indigenous city in the Southwest.