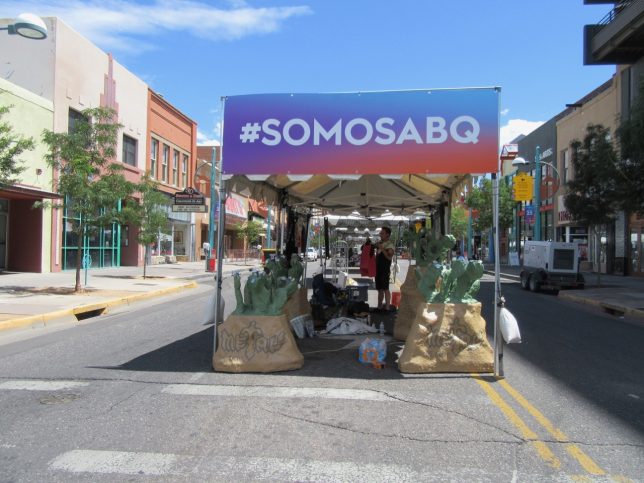 I live in downtown Albuquerque. Normally it’s pretty quiet on a Saturday afternoon so seeing it transformed last weekend to a huge block party for SOMOS was pretty incredible. On a normal Saturday night there might be a couple dozen people out on the streets, but during SOMOS there were hundreds, maybe even thousands out in downtown. The streets are usually filled with cars but on this Saturday they were filled with art installations and vendor booths.

SOMOS (which is a Spanish word that means “we are”) is a festival celebrating Albuquerque’s downtown and the best of Albuquerque, including live music, local restaurants, art, and culture. This year was the second annual event and I can’t wait for the third.

Natalie Voelker’s interactive piece featured three tall, powerful women figures. There were slips of paper to write prayers/hopes/wishes on, to be stuffed in the ladies’ pockets, and LED candles to put at the women’s feet to illuminate them. 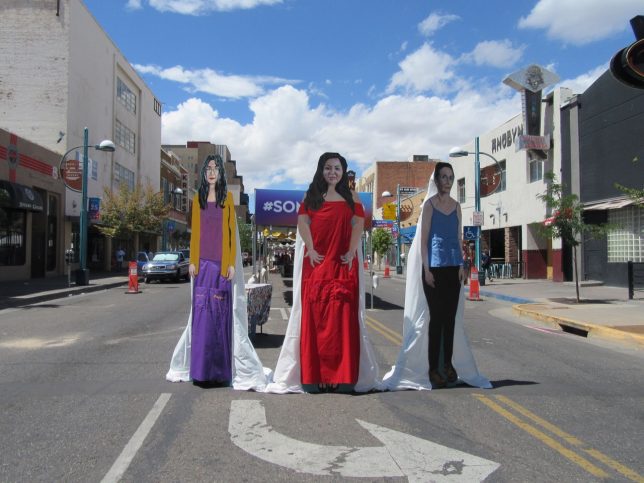 Reyes Padilla’s installation featured cylinders painted in his signature black-and-white brushstrokes, in an array in the center of the street. It had lights to illuminate the cylinders at night. 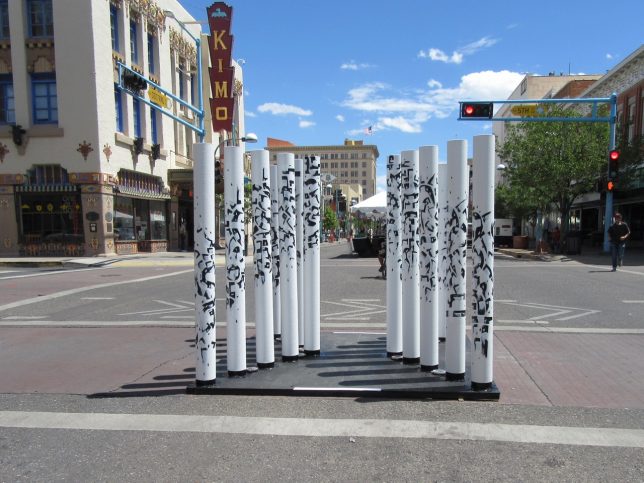 All of the installations were amazing but one that I found especially intriguing was called Odd City. Odd City is based on the epic The Odyssey by Homer. It had a coastal theme, with elements including a lighthouse (with something like a disco ball), boat and blue waves. There was also a grassy platform that people could bounce on, kind of like an organic jumper. 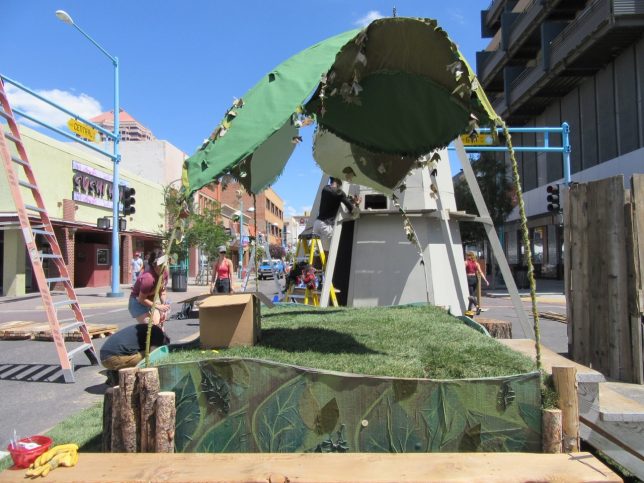 Another installation that I thought was cool was the aerial act at 5th and Central. Members of AirDance NM—including Monica Demarco, Anodyne Smith and others—were performing high above the ground in hoops and silk fabric. It was amazing! Around the aerial act, people were walking on stilts and carrying huge jellyfish. 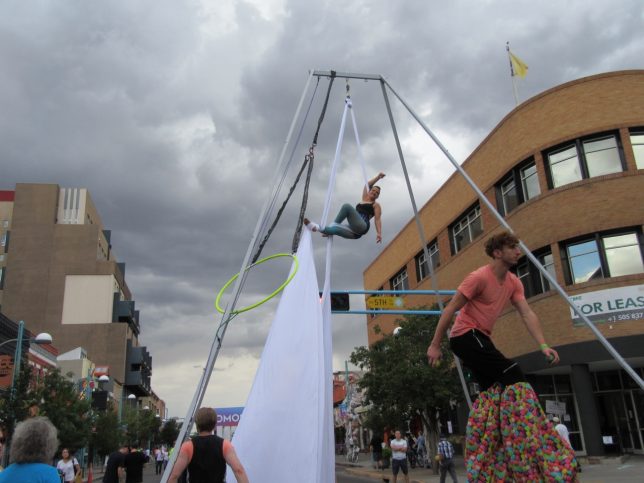 Besides art and performances, many booths featured some of Albuquerque’s local restaurants and shops like Slate Street and Spur Line Supply Co. I saw the cutest stuffed animals at the Spur Line tent! The succulent stuffie and plush avocado were adorable!

It was fun to just stroll down the streets looking at the different installations. Everywhere you looked there was interesting stuff. I even saw a mini horse and a goat! I got to pet both animals and take a picture with the mini horse. It was the cutest thing! I also had fun doing some cooking at an interactive booth hosted by Kids Cook, making Indian-inspired fruit salad and bread.

I haven’t even gotten to the music yet! There were several music stages featuring the best bands in Albuquerque and international artists. There were four different stages around the festival for the different genres: Rock, dance, hip-hop and R&B. 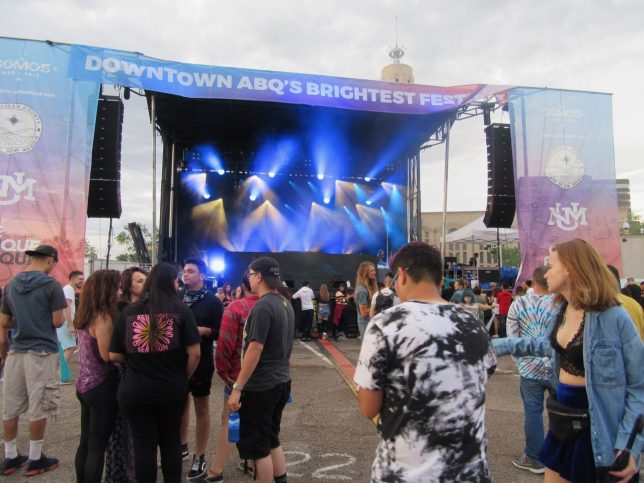 Stage at SOMOS, just getting warmed up. Photo by Jila Kat.

About an hour into the event, the skies got dark and windy and it started to rain. My mom and I ran into Boiler Monkey, one of our favorite downtown restaurants. A lot of people ran in there with us! Boiler Monkey was like a machine, cranking through a bunch of orders for soggy customers.

Instead of running inside to protect themselves, the artists ran out to cover and put tarps over their art so all their work wouldn’t get ruined. It showed how connected the artists were to their installations, and to each other. The rain didn’t seem to bother visitors at all. Even while it was raining, people kept checking out the different installations with umbrellas held over their heads. After a while, the rain let up and the artists went and took all the tarps off and fixed the things the rain broke.

I loved SOMOS because it wasn’t just aimed at adults. I love downtown, but I’m in middle school, and downtown there are a lot of bars and not a lot for kids. SOMOS had both. They had a beer garden for adults and fun installations and booths for both adults and kids!

The next morning, my family and I drove into downtown to go to breakfast and it was crazy how you totally couldn’t tell that there was a huge festival there the day before. It was bizarre how different it looked without all the installations, bands, booths and people. It was back to being “regular” downtown Albuquerque, but it felt a little different. SOMOS brought out the best of downtown ABQ and everyone who came to the event was treated to art, music and culture that they won’t forget.

It was fun to go to the event early (I had a Media Pass) and see all the artists setting everything up. Here are some photos I took. 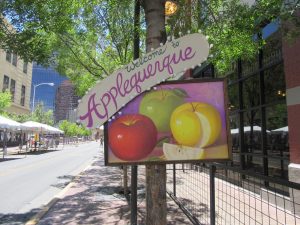 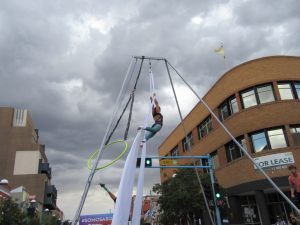 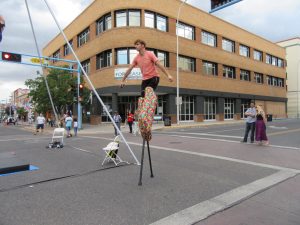 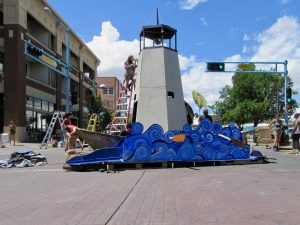 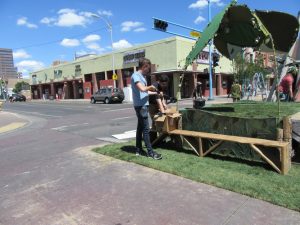 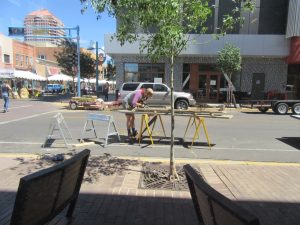 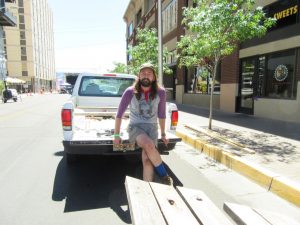 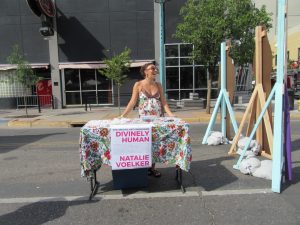 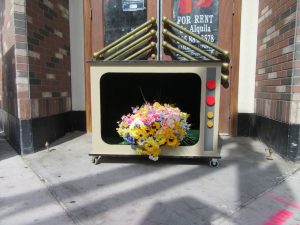 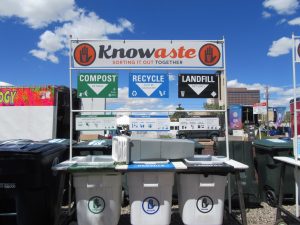 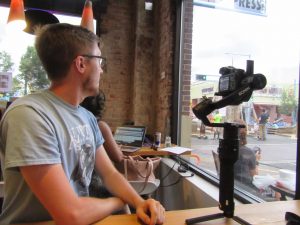 Waiting out the rain at the Boiler Monkey, with photographer Austin Madrid. Photo by Jila Kat. 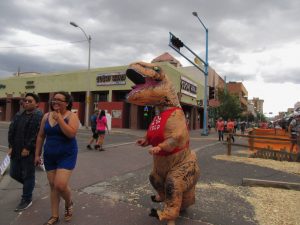 Hi, my name is Jila. I love traveling and taking road trips with my family. I also love animals; I have a dog and a cat and I love them a lot. My favorite thing to do is to bike around with my friends. I live in Albuquerque, New Mexico and I love it here!

View all posts by Jila Kat →