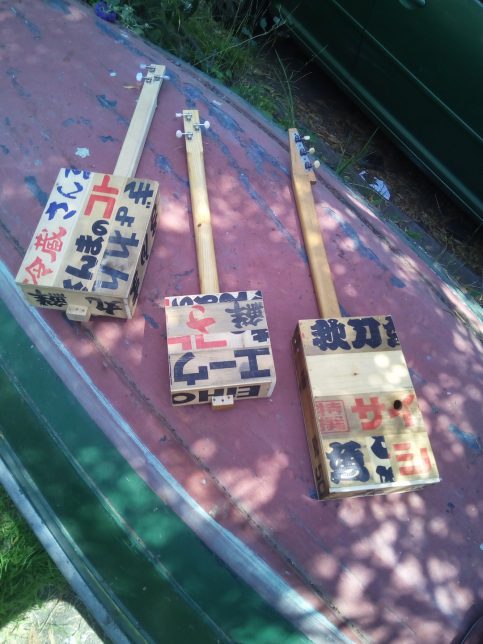 When visitors to my guitar-making shop in Akune, Japan see guitars made from fish boxes hanging on the wall, I watch them ponder with a surprised facial gesture, then ask “Are they stinky?”

The story of the fish-box guitar begins on a ship called a maki ami gyosen or “roll-net fishing boat.” You may know the word maki from eating sushi; it just means anything rolled up. Ami means net, and a maki ami is a common kind of rolled-up fishing net. A roll-net boat is used to catch a fish called sanma, or Pacific saury, a slender silver fish that is about 10″ to 12″ long and looks like a stretched sardine. The fishermen reel out a long net, circle around a school of sanma, then reel the nets back in.

Sanma are netted off the coast far in the north of Japan, iced, packed in colorful, boldly printed red, blue and black boxes, and shipped south to all areas of Japan between Kagoshima prefecture and Hokkaido. The two-foot-long flat torobako (“fish crates”) measure about 4″ deep and 16″ wide and are made with slats of pine on which the words SANMA, “Fishermen’s Association” and other brands are printed in kanji and hiragana (two types of Japanese writing). The printing has a beautiful graphic quality whether you can read Japanese or not.

Structurally my fish-box guitars are elemental: a box body connected to a stick-like neck with three tuners and strings, and two bolts for bridge and nut.

It was the graphics that first attracted me to the torobako as possible materials to make some kind of guitar from. For a non-Japanese reader I suppose the characters hold mystery and interest, perhaps in the same way that a collage or combine painting by Robert Rauschenberg holds our gaze. The letters are familiar in graphic quality, but when sliced out of context and reassembled, it provides another way for them to be seen, as an abstract design, or fragmented juxtapositions that are pleasing to view.

All I wanted to do was make a cigar box-style guitar, and in this town there were no cigar boxes to be found. The next best box to find for free were the torobako, so in keeping with the southern cigar-box tradition of using what you had on hand locally, I picked up fish crates, tore them down to slats and made my own boxes for the guitar body. 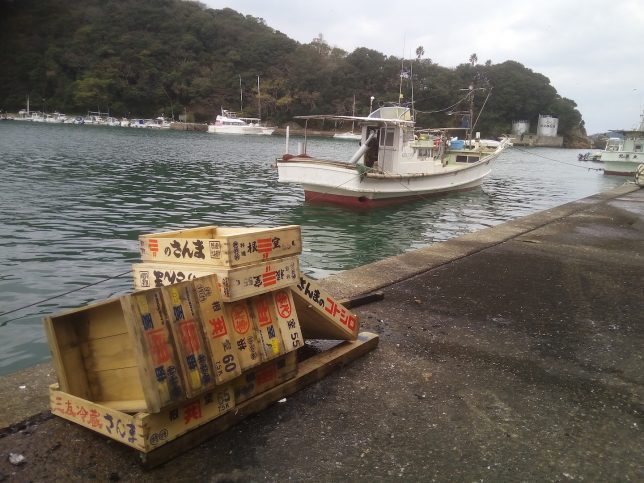 When collecting torobako I scour behind the older unmaintained buildings of the dock through thickets of licorice-smelling fennel for stacks of the crates stored on ramshackle wooden pallets. The choice boxes are those that have enjoyed a thorough cleaning by the sun, seasonal typhoon drenching as well as normal rain squalls. Their metal staples have rust stains and the wood is marked with patches of grey oxidization.

Based upon their weathered condition, I estimate that the boxes sit out for two or three seasons of rain washing and solar disinfecting before I find them and drive them to my workshop. Any fish smell or wharf funk has been washed out of the pine wood well before I deconstruct the crates back to single slats with my robust carpenters’ staple-puller and table saw.

I sort and stack the slats into groups. When I put together the body for a fish-box guitar, I parse through which graphics seem to merge together in eye-grabbing combinations. I join several slats side by side with clamps, and glue into wide, flat panels from which I assemble tops, sides and backs. The smell of sanma is long gone by then, but if any doubt remains, I leave them out for a few more weeks to bake in the UV rays of the 33rd latitude. 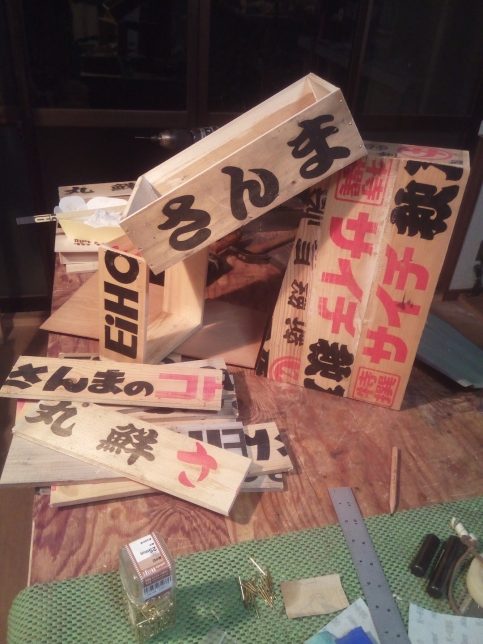 I model these fish-box guitars on a traditional cigar-box guitar, a folk style of American guitar that originated in the far south of the US. Small, thin-walled, sensitive to vibration, and used for shipping cigars, these wood vessels were transformed by common folks into marvelous, one-of-a-kind works of folk art that played music. The usual format was to attach a broom handle or wood plank to the box in a way so that the tension of guitar strings on the structure would not allow it to fold over onto itself. Many an ingenious way of connecting stick to box were invented and gave rise to a whole genre of instruments of roughly the same type: a primal chordophone made of a resonating chamber with a neck attached, over which some cords or wires were stretched up to a musical pitch.

Structurally my fish-box guitars are elemental: a box body connected to a stick-like neck with three tuners and strings, and two bolts for bridge and nut. The neck is one piece, and it is bedded into the body box by cutting some slots as wide as the neck and shoving it in. It gets tightened in with a few strategically located drywall screws, but otherwise structurally my instruments are not far off in constructional directness as the original genre of cigar-box guitar.

I use three cheap modern guitar tuners screwed to the headstock of the neck, and by pulling three strings from a bargain set of light-gauge steel acoustic guitar strings, the GDG modal tuning is possible. Also known as “open G modal tuning,” it consists of a note G (bass E string on the standard tuned guitar stopped at the third fret) followed by D a fifth higher, and another G an octave higher than the first G. It’s got a guttural sound owing to the octave G and the fifth interval between them. 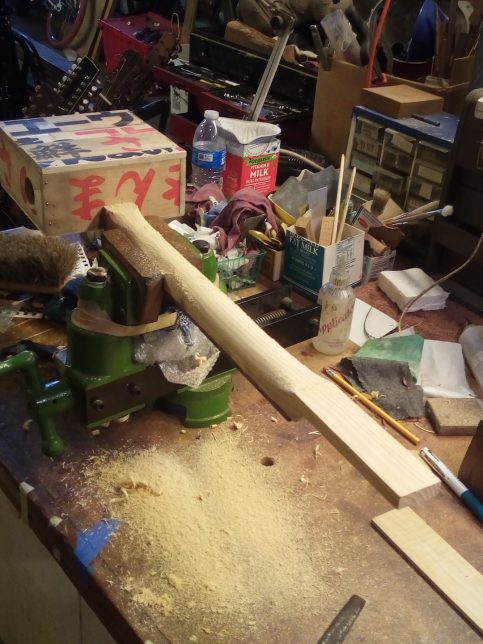 If you don’t understand this tuning description, don’t worry; what it means is that there are hardly any bad notes to hit. If you were to slide a glass or metal slide lightly over the strings and strum them you would make chords that would sound like G, D, E, F chords and so on, but in the simplest form. A beginner could, for example, play a rock tune like “Wild Thing” with the most basic moves in about ten minutes.

But while this tuning is basic and approachable for a beginner, to an expert blues player there are plenty of notes to work with. The torobako guitars are played with a glass slide, slide-blues style, or with a combination of fretted notes along with the glass or metal slide. I also like the sounds produced by using thick-walled copper tubing, metal plumbing pipes or chromed sparkplug-pulling sockets. Each type of slide gives a different tonal quality and one material may be more suited to a particular player or guitar. You have to experiment to find your personal combo.

The Catalan artist Antoni Tàpies was famous for his cultivation and use of “the meanest of materials,” in the math sense of median or average. Tàpies related to materials that have an earthy poverty, perhaps better described as “unremarkable,” but with the potential to be transformative. Straw, plasters, marble dusts, and mixes of these goops were materials Tàpies would use, usually from materials used in construction trades. Tiles and mortar can create bathtubs, kitchen floors, sidewalks or walls of buildings. Humble, non-showy woods can create furniture, cabinets and staircases. Rough, primal and laden with potential to be changed into something else, the materials Tàpies favored urge the craftsperson to build endless variants on a theme. They proclaim nothing more or less for themselves than that they represent the “mean”: the basic elements that challenge the maker to, in fact, make.

This is perhaps a lofty comparison to a great master of abstract painting who fused together earthy material into beautiful paintings, but I do find his idea to be a sort of validation. Before the democratizing Sears Catalog Co. offered mass-produced guitars at such low prices that almost everyone could get a guitar, folks who could not afford a guitar would build guitars themselves, using materials at hand. (Thanks to Sears many an African American blues player found a good guitar within reach, and this was a boon to art of blues.) The common thread is that through all schools of art-making, the humble material holds potential to the awakened maker.

“Mean” materials have the added value of not being precious, which can be prohibitive to using them freely and liberally. Unremarkable materials encourage us to reel out our imaginations for the sheer pleasure of seeing what we will net when we reel them back in.

A neat stacked pile of boxes on a pallet, or a heap of cardboard on a quiet loading dock; some people see a mess of garbage, but because I’m a maker of things, I see materials that can be cut with razor knives, screwed into, assembled, hewn down, glued up or otherwise manipulated in some way that transforms the funky matter into something new. Maybe it will be art, maybe a utilitarian object. There’s a joy of tiny discoveries for those who pay attention. 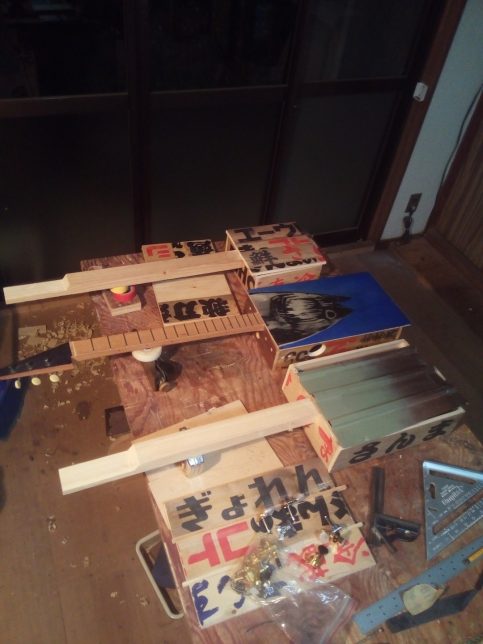 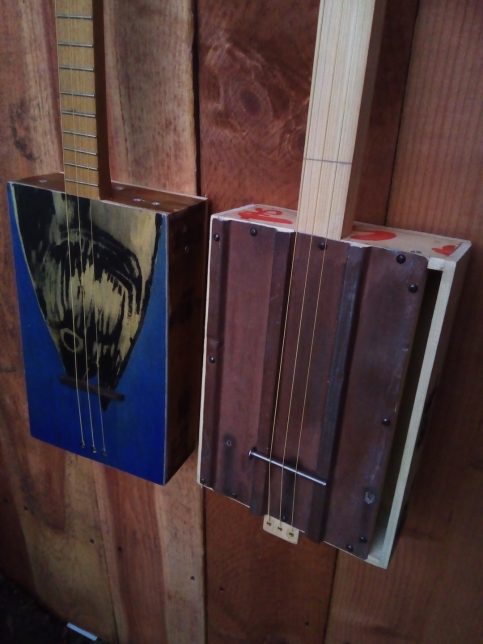 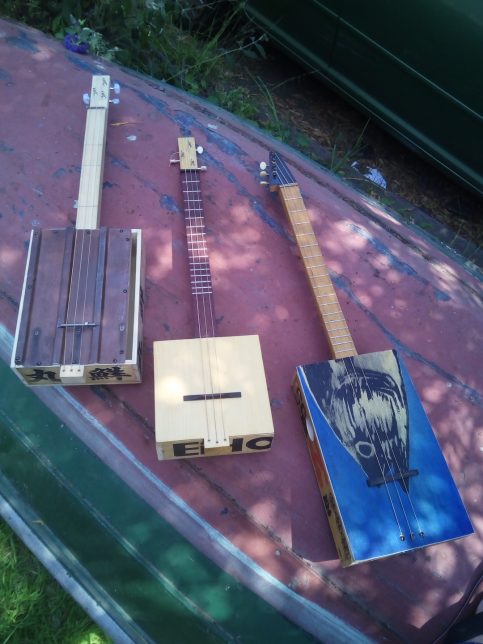 I’m a professional guitar maker and artist who lives in Akune, Japan. I teach English part-time during the week at Akune Jr. High school and rarely pass a weeknight or weekend without working at guitar-building in my kobo to fill custom guitar orders. If such a thing as a weeknight or weekend without working on custom guitar orders existed, I would probably spend it yellowtail and halibut fishing with friends. Painting, drawing, making sculpture and writing round out the kinds of making I’m keeping busy with. I play a little guitar too. Belief system: Cultivate the world into a better place through self-transformation and self-discovery by making things, and teaching people how to make things.

View all posts by Stephen Faulk →