Drew, Jeremy and Dane chill at a busy St. Pete, FL intersection at a red light.

There’s these twins and a drummer from St. Pete, FL, who want to announce their latest song Telepathetic — recently recorded at Sun Studios in Memphis.

Pyragraph: How did you get the chairs-in-street photo?

Jeremy: The concept involved 34th St and 22nd Ave N where the car lines are pretty long and the lights are longer. We had plenty of time to run out and chill on fold-up chairs with red drink. Our good homie and photographer Adam shot us from the other side of the red light. People screamed that we were posers and some thought we were protesting something. Probably like 35 seconds, did it in two goes.

Drew Giordano moved to Portland, OR last year from St. Pete, FL, where he played shows with his bands Selectric, Sonic Graffiti, and Deadborns. His lucky break came when a publisher in Chicago came across Drew’s record and offered to place his music in movies, video games, and wherever else fit. Drew gets royalty checks while living his full-time dream of writing and recording songs, and traveling back across the country for his other bands.

His twin brother Dane holds down the fort in St. Pete with his band Fever Beam and Plastic Pinks down in Miami, and Jeremy is generally out there tearing it up. 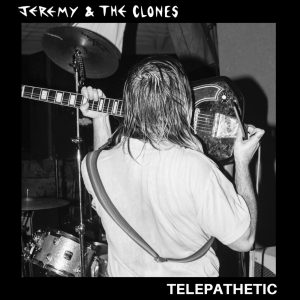 “Saw her last night in my city

I caught she was lookin’ at me

She was lookin’ telepathic

But I don’t believe in magic

At least not anymore…

A sound engineer from Sun Studio saw Drew perform with Sonic Graffiti in Memphis, and offered to record them — creating a chain migration of recording sessions among friends landing most recently to Jeremy & The Clones. A perfect example of why you’ve got to be out there with skin in the game!

Jeremy: It was kind of surreal and didn’t sink in how crazy and legendary the room was when we were there. It almost doesn’t feel like OMG I was in the same room as Elvis and Johnny Cash; there is some kind of vibe in the room that I can’t describe.

Dane: The one room that still has the Xs on the floor where Elvis sang – it’s the best spot in the room for vocals. The layout and dimensions of that room produces a unique sound… You loosen up with a couple shots of whiskey and you play your song, play to the room, and the room evokes a certain energy and you take that energy with you when you record… That room helped us pick that song to record, we don’t play it live with a piano, but Jeremy went over and played it on the piano Jerry Lee Lewis used, his cigar still burned into it from when he was recording. One thing Crockett says is it’s nice the space is still used after all this time.

Musicians can get stuck in their own patterns, and this band is their chance to create beyond themselves without repeating what they do in their other bands. They’re all stoked Telepathetic was written as a group. They use every fret, play every drum, everybody sings and Drew did the final mix with the band’s notes. Recording and engineering at Sun Studio was done by Crocket Hall and Mick Parrish, who made sure their vocal harmonies were on point. Their upcoming tour will be performed with a renewed vigor, a fresh cymbal and new merch, all made in their living room and kitchen. Their tour starts February 5, 2020. 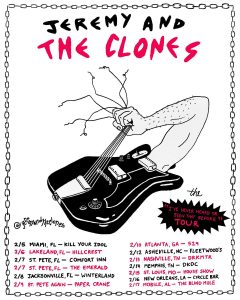 Pyragraph: How did Telepathetic come about?

Dane: Drew had just watched the Queen movie and wrote a stanky Brian May lick. Then Jeremy was like, “lemme see that guitar” and played a few chords for the following part. My clone and I both dug it and then we hammered out the rest of the song, ooh wap shoo-waps and all.

Jeremy: There will be a public music video shoot, all are encouraged to join us Feb. 9th during our live set at the Freaklove II Festival at Paper Crane in St. Petersburg, FL. We will have free (provisionals) for the crowd. We’ll be pulling every trick in the book and utilizing several props. It’s gonna be an absolute party.

Pyragraph: How do you books your tours?

Dane: I like to start booking tours 3-4 months in advance. So many cities are losing venues now and the more time the better. First we come up with the route, then just have at it. All three of us have toured in multiple bands, so we have connections. We also start fresh in a lot of places, just emailing everybody we can. Our good friend and accomplice Tim Weston helps us book a lot of shows, too, and he is actually a real pro. Real diamond in the rough. 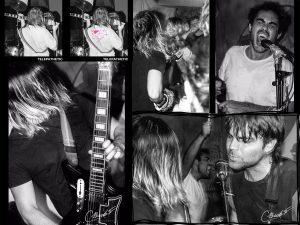 Looking to book your next tour? Check out our popular post by Shenandoah Davis How to Book A Tour: A Timeline.