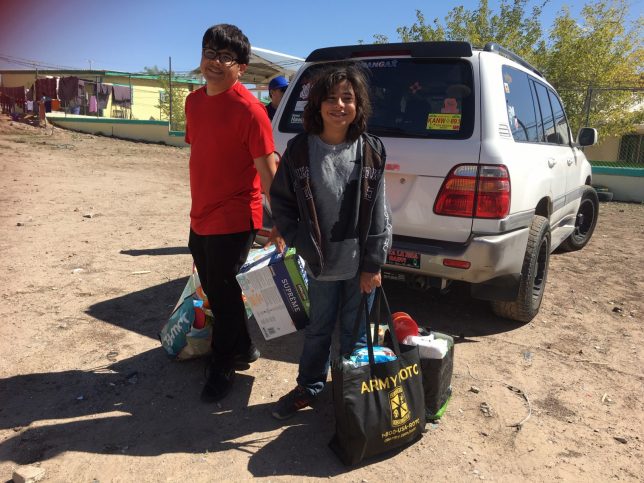 My brother Tomas and I (I’m in the red shirt) bringing in supplies to Comedor Pan de Vida. Photo courtesy of Lucas Romero.

Guest Blogger Lucas Romero is a high school sophomore and was recently awarded a prize for his essay about doing volunteer work helping asylum-seekers at the US-Mexico border. Through a service learning project of the Disney Creativity & Innovation Internship Program, ten winning essays from Lucas’ school were chosen, and the winners were awarded an all-expenses-paid trip to Disneyland. Here is Lucas’ story.

Although I was born in the United States and currently live here, for 11 years of my life I lived in South America. My father is New Mexican, and my mother is Brazilian, and because of my father’s job as a journalist most of my life was spent in countries where the language is Spanish or Portuguese. After we moved to New Mexico in 2017, my mother got a job as a site coordinator for Catholic Charities, a non-profit organization which assists refugees from around the world. I volunteered a few times there and witnessed how some people are less fortunate, coming from unstable countries filled with violence and upheaval. El Salvador, Guatemala, Brazil, Honduras and several other Latin American countries are plagued by gang warfare and government corruption. A lot of people are looking for better lives in America, and we can’t blame them for that. I don’t think we should accept everyone but if people are just looking to make life better for themselves and their families, willing to do the work Americans aren’t, why not help them?

My first time volunteering with asylum-seekers was in a convent in Rio Rancho, where buses were arriving every week from detention centers. I spent three afternoons helping to translate for the volunteers and families, distributing pre-paid phones for families traveling to other parts of the country, making popcorn for the kids (which was enjoyed by adults too), and playing with some of the kids. After the US imposed the Remain In Mexico program, otherwise known as the MPP, the buses stopped and the help was now needed at the border.

During my visit to Juarez, the amount of kids and teenagers younger than me in the shelters was astonishing, and that was just in two of the shelters where asylum-seekers stay in Juarez. There are several more shelters in other border cities and several tens of thousands of people seeking asylum in the US. I understand that the US shouldn’t have completely unrestricted immigration for reasons of national security, but the government shouldn’t purposely make it so hard for people applying for asylum, especially because a lot of these folks have valid reasons to flee their home countries due to violence. 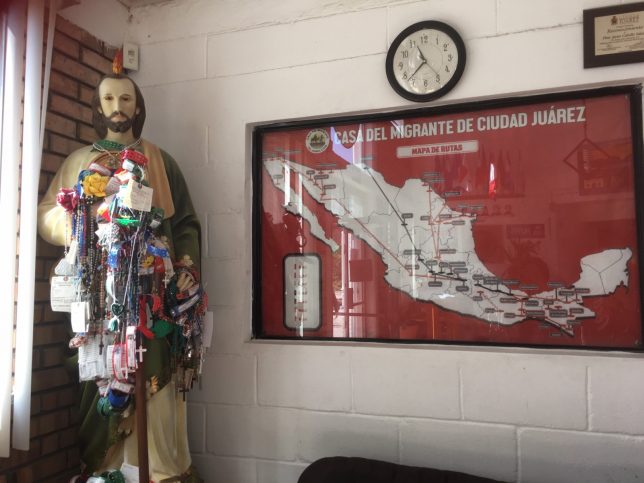 At first, I was confused on what to do with the project. Originally, I thought of doing something in Albuquerque related to immigrants. Then I recalled that my family had scheduled a trip to El Paso to do volunteer work at two different shelters there. A friend of mine and his mother had accompanied us. I realized that going down to the border and assisting these people directly had an impact both on the people I helped and myself. It gave me an even clearer view on what is happening right outside of the country, and right along the border. Seeing Juarez reminded me a lot of Rio de Janeiro, where I used to live. The poverty, the lack of infrastructure, the sense of insecurity, were all similar to Rio’s favelas. I can’t say I grew up in poverty, because I didn’t. But I’ve seen it with my own two eyes. People don’t choose where they’re born. But they should be able to choose what to do with their lives if they’re willing to work for it and find a safer environment.

Seeing the people at the shelter was a bit different than the convent in Rio Rancho. They all spoke Spanish, with some shreds of English mixed in. There were accents I never heard before, and even though I speak Spanish, it was still a challenge at times. When we visited the shelters Casa del Migrante (Migrant’s House) and Comedor Pan De Vida (Bread of Life Soup Kitchen), I saw children playing and parents praying. At Casa del Migrante, they had an altar in their garden with the pictures of those who had passed through the shelter. There were kids playing outside, a photographer documenting the place, and a doctor giving medical care. Soon after delivering donations of food and medicine, we went to Anapra, a poor neighborhood in the outskirts of Juarez to visit Comedor Pan de Vida. Just to get there, we had to go through dirt roads and street vendors, the shelter isolated from the city’s core.

The scene kicked in, and it shocked me.

When we arrived, we first delivered some donations consisting of food and medicine. The director of Pan de Vida, Ismael Martinez Santiago, gave us a tour of the shelter. There were children playing a game of makeshift checkers, dogs and cats wandering around, and parents cooking meals in the houses. We visited three houses to learn about the needs of the people living in this shelter. The houses were old, in dire need of repair. The bathrooms were damaged, the showers made of improvised pipes and the walls missing. The scene kicked in, and it shocked me. There were over 200 people, only 13 houses, and the bathrooms were in horrible conditions. That was something I’ve never seen before. In one of the houses, we saw some artwork on the walls, and we bought some pieces for $20 each. The fact that they could make such beautiful artwork with limited supplies was a distraction from reality. One was a Day of the Dead skull, drawn with markers. Another was a peacock created with color pencils. A different one was a drawing of two vases, one with a Mexican flag, the other with a Honduran flag.

After the tour, we went out to purchase some groceries, gasoline and propane with the money that volunteers had donated through Catholic Charities. While one of the teens was filling up the propane tanks, I interviewed Director Ismael, who shared with me how the shelter was founded, who lives in it now and the dangers of Anapra. He had founded the shelter with a priest 30 years ago, but since the priest’s passing, he has become the shelter’s director. All of the people staying there were from Central American countries, such as Honduras or Guatemala. He spoke of the threat of coyotes and human traffickers, and the challenges of maintaining the shelter, as he relies on donations. We found out that just the water bill alone was 16 months overdue. 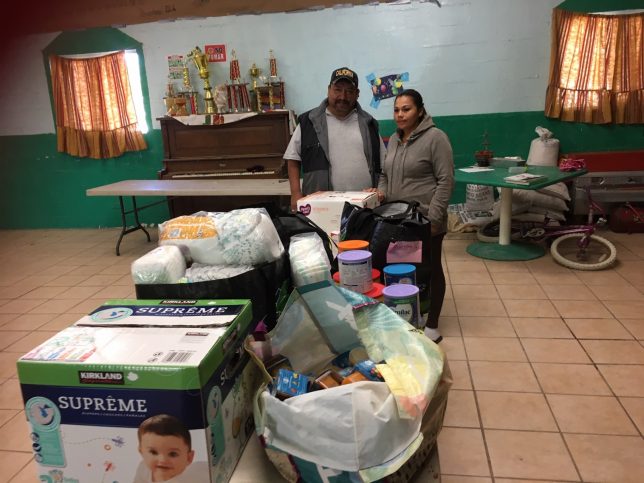 The supplies we brought from Albuquerque: diapers, baby food and shoes. Photo courtesy of Lucas Romero.

Coming back from the trip, I felt conflicted. I felt happy that I helped some people, but helpless that I can’t help everybody, and knowing that they’re still there, stuck in Mexico, trying to come to the US to meet their families, not knowing when or if that will ever happen. Seeing the kids not being in school, their parents’ worried faces, it was difficult and it still is. As I focused so much talking to the director in my first trip, it is a regret that I only interacted with a few people. I would love to learn more about the people staying there. I hope I can raise funds to buy art materials for artists like Carlos Benjamin, the man who drew the Day of the Dead skull. His painting resulted in a $1,000 donation to the shelter, as our family donated it to a fundraising auction event where somebody bought it.

Just recently, my mom heard from Carlos that he’s still at the shelter, his appointment with the court has been postponed to February. Unfortunately, I believe that Carlos will still be there by the time I go back in February, as the courts have been delaying all the applications. I will most likely see the same people who were there in October, waiting patiently for their time to present their asylum cases. There is still need for more donations such as food, clothes, kids’ supplies and more. I hope to gather some money before my second trip to be able to support these people, and I plan to keep helping this place and telling their stories to the public. 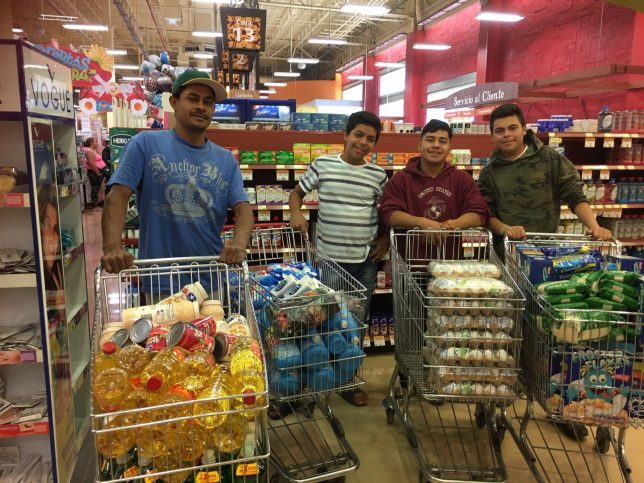