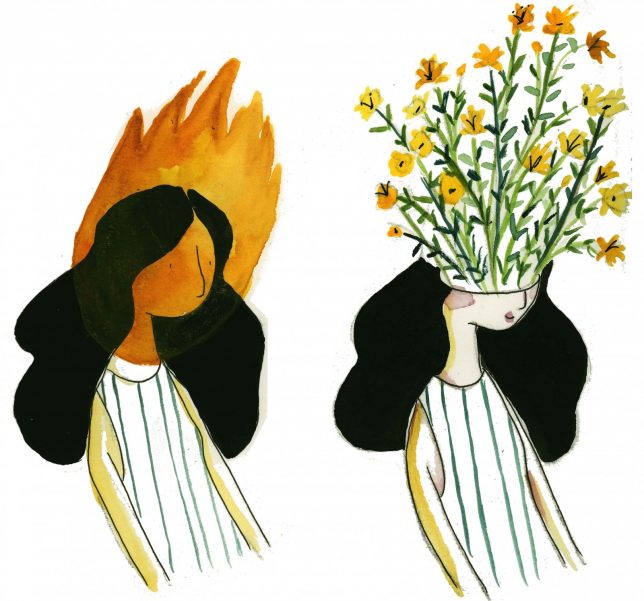 Zahra Marwan, Burning the Anguish. Watercolor and ink on paper, 2018.

In a free and just world I would be complete. My basic information wouldn’t be a cultural or political affront, and it certainly wouldn’t be up for debate. 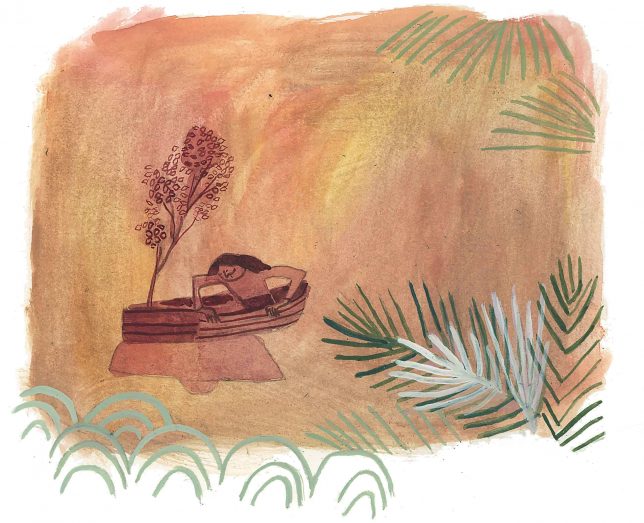 Zahra Marwan, As Strong as a Ship at Sea. Watercolor and ink on paper, 2020.

Activists for stateless rights tortured in the late winter desert early this year. If I say, carefully and with all my love and grief:

“I’m sad that my parents had to choose between suffocating open-discriminatory policies in the only home they knew and loved or face living far from their family and culture so that their children could have basic rights.”

Will I be tortured in the desert?

Or, will someone like my stateless cousin succumbing to bouts of depression feel relief? Who from the depths of her grit acts in the National Theater, but continues to feel buried by these policies.

I am a Shi’a Muslim. I love my culture and upbringing.
How do I say this without retaliation in the West, and without inquisition-like proof in the Middle East?

I hold a lot of Islamic values close to my heart. Poetry, literature, music and philosophy are dear to me.
Generosity of heart. Solidarity with the oppressed.
I’m a balance between “I’ve never lost faith” and a soft and vague “culturally.”
Circumstantially I was robbed of proper exposure and community.

Lost in translation between Levant Arabs in the Gulf who registered Iranian families in the 1950s, our family name was Arabisized to Marwan, which is typically Lebanese or Syrian, and a very Sunni name. It makes me feel even more stigmatized in Kuwait. It feels so far from my family history, in a place where people often earn respect, class, mobility and social status from family kin.

Comfort and freedom in homogeneity. 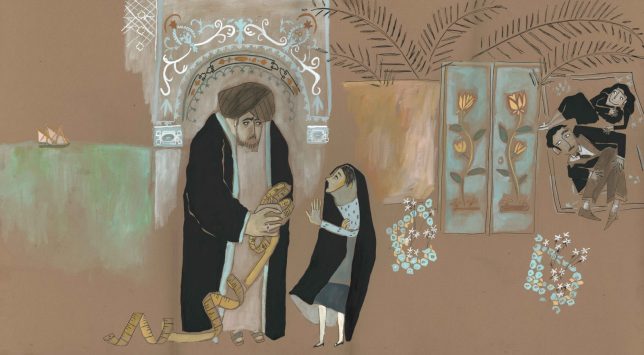 Zahra Marwan, Who was my grandmother hiding, and who was the man disguised as a tailor looking for them? Watercolor and ink on board, 2020.

A Week Abroad to Explore

Shallow observations during your two week trip in Egypt doesn’t make you an expert on women’s rights in the region.

“Women where you’re from are not free.”

When vague international criticisms are addressed directly at me they feel less like solidarity and more a reason to debase my humanity. If a person is so upset, perhaps they can try writing to a media outlet in said country. I’m not an opinion platform. Who are they addressing, anyhow?

The freedom I’ve seen in the most stringent and conservative circumstances are unlike some of my presumed liberal counterparts. Activists in the region are humble, have a lot to risk, and bravely fight for minority rights in sometimes subtle and clever ways.

A Kuwaiti woman stood by me as a formerly stateless person rooted culturally in Kuwait. When Iran was brought up, I became addressed as an American. “How could your government treat those poor people like that? They don’t have access to medicine.”

While speaking Arabic in public in Albuquerque, we were interrupted by a person who I later found out to be progressive. She interrupted us to ask where we were from. She told us that she had studied in Lebanon, and that people didn’t like her because they assumed that she was from Kuwait [or the Gulf]. Nothing about her gave an air of a Gulf Arab.

Okay, thank you for the input. I’ll address this in the next international diplomatic conference to rectify this for you.

I stand as a representation of governmental, social, and cultural problems of many places. 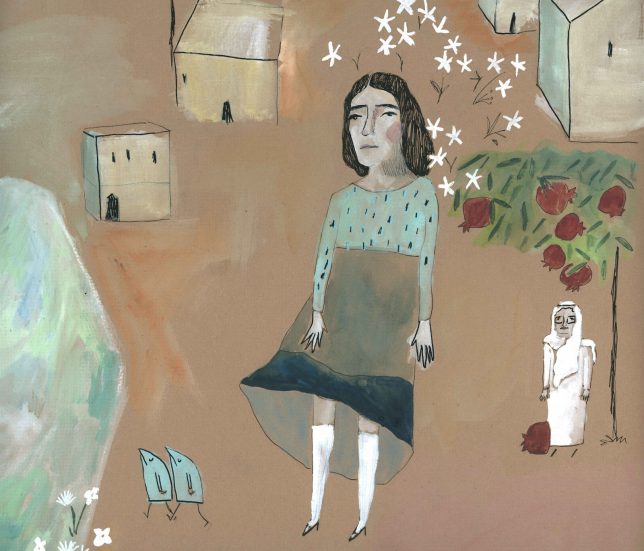 Zahra Marwan, Grandma, Grandpa under the Pomegranate Tree. Extract from a larger painting. Watercolor and ink on board, 2020.

“Zahra, where is that from…oh, did you know that Iraq invaded Kuwait?”
“Yes, I was there.”

He didn’t find anything he said to be wrong, and thought that I didn’t seem bothered. I avoided the art building for a year. Action wasn’t taken since it didn’t affect me academically. My visual art studies were interrupted.

“Have we met before?” He asks years later at the museum. I stick my hand out to shake his and say,
“Yes, my name is Zahra. I met you at UNM many years ago.”

What I don’t tell him is that I’ll never forget.

“Where do you get your money? Does your dad race camels or own oil wells?”

“My Uncle was murdered with a hand grenade because of oil at 33, my dad sleeps on the floor. How much money do you make? You act like you’re here to help minorities, but maybe you should be real with yourself.” He calls to apologize and invite me back to his program. I drop out. 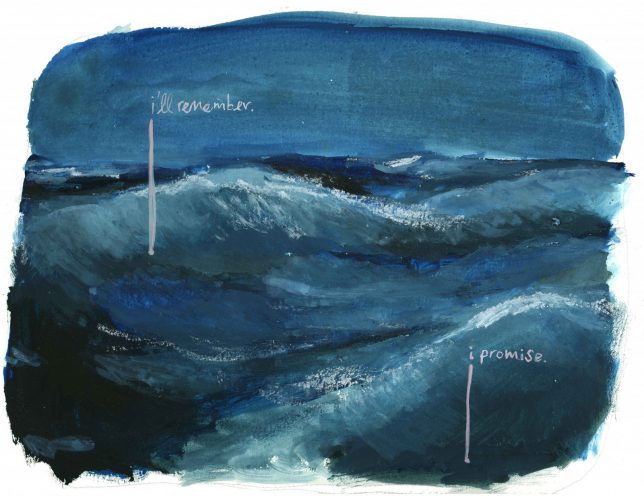 Zahra Marwan, Stories Against the Sea. Watercolor and ink on paper, 2018.

An administrator before dance class was talking about the elections. The talk was about Hillary or Bernie. “I prefer Hillary because if she has to, she wouldn’t be afraid to bomb places like Iran or Kuwait.” I looked at someone who looked back at me. I wished he would say something.

I didn’t say anything.

And those who care?

I remember the people who’ve stood by me.

A flamenco guitarist told me:

“Hey, you don’t need to feel scared or ashamed to say where you’re from. I’ve felt that way too.”
Thank you. I won’t forget. But I always do.

Freedom like the flowers growing out of my head
Set constantly and circumstantially on fire.