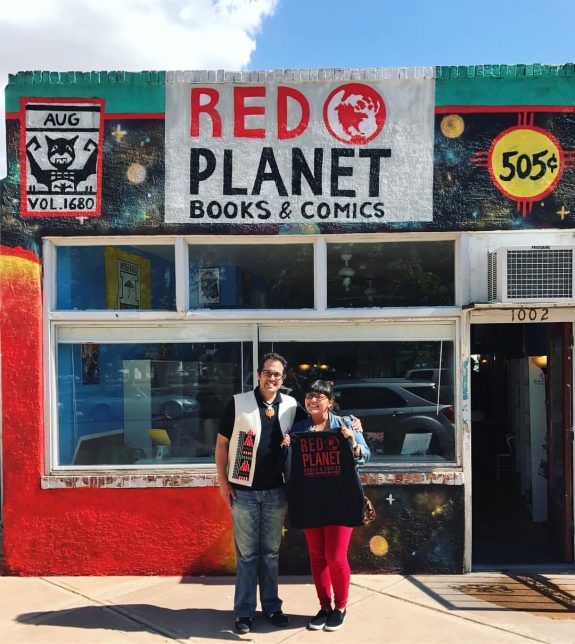 Dr. Lee Francis IV is the “Indiginerd” mastermind behind Indigenous Comic Con (aka IndigiPop X) and Red Planet Books & Comics, an innovative storefront and online shop in Albuquerque, NM, dedicated exclusively to Native and Indigenous works. And those are just two of the hats he wears. With a PhD in Education, “the Stan Lee of Native comics” is involved in nonprofits that lift up entrepreneurs from marginalized communities, helms indie publisher Native Realities Press, and even helped recruit talent for the forthcoming mainstream comics anthology, Marvel Voices: Indigenous Voices #1. Recently, he very kindly answered some questions for Pyragraph by email.

Lisa Barrow: First, some background on your bookstore. How and why did you come to start it? What does it offer? Who is it for?

Lee Francis: So, following the first Indigenous Comicon [in 2016], we had such incredible energy from all of these indigenous nerds that had gathered and had brought their talent together and so we wanted to capitalize on that. We had been working with a local entity (SWOP) and they had space available in their complex and it seemed like a really good option because, honestly, we needed more office space (given that we had all of these banners and posters and artwork and comics from that first Comicon). So we thought it would be a good opportunity to open up and start the first indigenous comic book shop in the world. I think our audience is really Indigenerds, which I define as people who want to see dynamic and authentic representations of Indigenous people in popular culture. I think that we have been able to provide some amazing comics that you can’t find anywhere else and we have the largest assortment of Native books this side of the Mississippi.

What are some of the benefits of specialization in the bookstore business? Are there drawbacks?

I think at this point there are more upsides to a specialized bookstore/comic shop then there are downsides. I think with the digitization of the industry, it has been a better option to be specialized because it allows us to focus on our audience. It allows us to bring in those folks that really want to see this kind of work and knowing that we are a central hub for that kind of work really allows us to flourish in that way. I think the downside is the fact that we don’t offer a wide selection. We are very specific in our selections although we do carry some general copies of various things and now Native Literature is really taking off so there’s a lot more that you can find in the mainstream. But it still means that we have a limited reach in terms of who we can go and market to.

The algorithm has not caught up to us just yet in terms of being able to discern what is an authentic Native or Indigenous perspective and what is not.

Let’s talk about that elephant in the room. Or is it more like an octopus, with its tentacles in everything?—except I like octopuses. How do you compete with the likes of Amazon?

I like that: an octopus. I don’t try to compete with Amazon. It is so immense and if we should continue with this metaphor we are a small fish and a very unique one like a clown fish. We have a very specific role in the ecosystem. What I do think about the octopus in the room is that because we’re so specific we can do more and we can encourage people to focus more on some of the principles that they would like to live by so. So for example we have a number of authors or illustrators or academics and scholars in the field and I put out a call to them to say hey support us rather than this big company because a lot of the times when you post you’re posting in favor of this company that is a colonial incursion into our daily lives. So it gives us the opportunity to seek out and fulfill and satisfy those folks that want something different.

What message do you want everyone to know about the value of Red Planet Books vs. the value of ordering from the industry megalith? Are there benefits to the book-buying public in using your bookstore over the convenience offered by the most dominant bookstore?

The biggest thing that we can offer over a big any big monolithic company, megalithic company (?), is that we have specific knowledge and we can cultivate the orders. The algorithm has not caught up to us just yet in terms of being able to discern what is an authentic Native or Indigenous perspective and what is not. I think that we do a really good job cultivating lists for schools and community centers. I think we can find things that have not been printed on a mass scale. I think that we can bring in people that have not been represented and find Amazon kind of unwieldy and find these big mega-companies to be very unwieldy in terms of how they can distribute and get Indigenous and Native books into the world.

Relatedly, you’ve talked on social media about creating “sovereign economic communities.” Can you explain a bit about what those are and why they matter?

Sovereign economic communities are those types of systems that create an ecosystem to allow for a flourishing of Indigenous identity and prosperity. We have seen parallel examples or for most examples in things like Harlem or Atlanta back before desegregation, where the economic power had been centered in those communities for African-Americans. We can see that in Chinatown‘s throughout the United States as well. So creating sovereign economic communities is really focusing on how do we create a sustainable system for, by, and about Indigenous peoples. 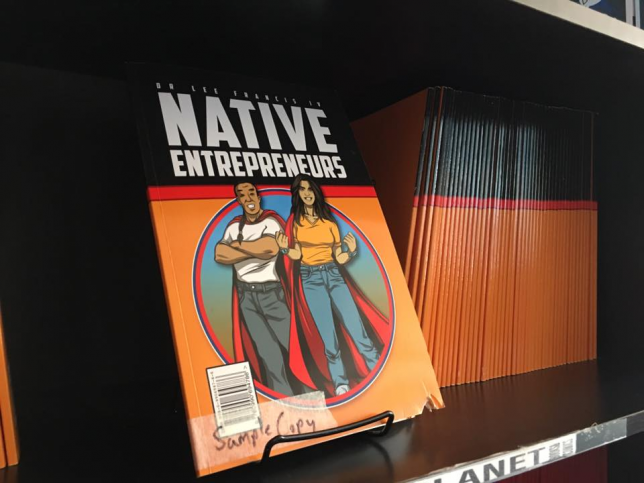 How has Red Planet been coping with the pandemic?

Always a great question during the time of pandemic. We follow the lead of a lot of other organizations and small businesses. We shut down for a little while and then we were able to open back up. In the meantime, though, we were still shipping and we were still distributing and putting our product out there in the world and we had a little bit of time to create some more products and to put more things into the world. So that’s actually been a benefit for us. We also had a chance to really consolidate and focus on what we were wanting to do. So that’s how we’ve been coping.

What is ReUnion? Why have you become involved with it?

What advice can you give to other entrepreneurs who are interested in doing work that supports community?

I think the best advice I can give is to focus on creating sustainable systems. And also creating systems that are generative. That means those types of systems that support the community, that give back to the community, that are allowed to build into the community in a way that doesn’t repeat colonialism or ultra capitalism but rather reminds us of our ancestral ways where we were able to create beautiful market places and have thriving systems of trade and development, culture, and creativity.

You’re involved with Native and Indigenous literature at far more than the retail level. Can you talk about some of your other projects, such as Wordcraft Circle?

So Wordcraft Circle is the nonprofit that has paralleled the work that we’ve done through Red Planet and Native Realities. It was founded by my father in 1993, and I took up the mantle after he passed away. As a nonprofit, the big focus is on how do we support getting the word out about Native literature, stories and creatives and also developing emerging writers by creating networks and connecting them with professional writers and storytellers. Right now with Wordcraft we’re developing some youth literacy videos. In the past, Wordcraft has been a prime conduit for the work that we do with the Indigenous Comic Con and has continued to be a leader in supporting Native literature throughout the United States.

What are you reading? What’s coming out that you’re excited about?