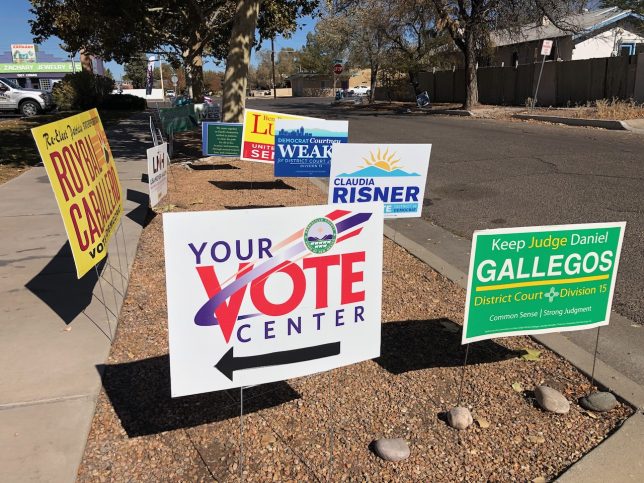 When I check my mail these days, I always have at least one postcard from a local politician. When I turn on the television, I see campaign commercials. And when I drive around town, I see lots and lots of political signs.

Political campaign signs are nothing new. Here in America it’s been going on for 200 years, all the way back to John Quincy Adams, who encouraged his supporters to make their own signs and put them up in front of their houses. I’m sure it was sort of strange at the time, but it worked, and since then it has become fairly normal for people to put up signs in their yards, proudly declaring their political allegiance. Not only is it normal, but it’s cyclically expected, and socially accepted.

But this year has been different. There has always been a divide between Democrat and Republican, but this year that divide is massive. And the idea of what is socially acceptable is much more complex. Your neighbor is part of your society, and if he hates your sign then he might not accept it! The reported number of political signs being stolen this year is higher than ever in almost every state keeping track. And it’s not just one party doing it; Trump signs and Biden signs are both being destroyed.

As an artist, I’ve always been fascinated by the constantly shifting line which determines what is socially acceptable and what is not. That metric is influenced by everything from location to humor, from time of year to quality of work. Understanding all of this is particularly important when creating art in the public sphere, such as political signs, street art, graffiti, or murals. Every time and place has its own set of rules. Not that an artist is under any obligation to follow them, but I find it is helpful to at least be aware of them.

He hopped out of his car, grabbed a sign from the backseat, then zip-tied it to a light pole!

So what will a society accept? In capitalistic America we will accept almost any type of advertising. Look around you; advertising is literally everywhere. We see ads on billboards, posters, cars, clothing, napkins, furniture, signs, and so on. Legal murals are mostly accepted, though certain content is favored. A pretty painting will be more easily embraced than a scary one. Graffiti is almost never accepted, though at times it is tolerated. Graffiti on a fancy building will be cleaned off, while graffiti on a trash can or light pole is less of a threat.

In ancient Rome, there were no companies that could just crank out 100 yard signs in a day for you. In those days, in Rome and in other societies, political messages were written directly on the walls of their buildings, painted or scratched onto the stone structures. Some of the earliest examples of graffiti were political messages! And it was widely accepted in that society, no problem.

And today we see politicians, advertisers, and artists all using the same methods to nab attention from the public, though for very different reasons. A politician wants your vote; an advertiser wants your dollar; An artist wants…what? Depends on the artist.

Although I’ve done graffiti I don’t call myself a graffiti artist; instead I consider myself a “street artist.” The differences between graffiti and street art are subtle and insignificant unless you are actually involved in either scene. But rather than painting directly onto other people’s property, street artists tend to create art, then later install it in public places.

One night I was planning on installing a piece of artwork. It was a board I had painted on, which I planned to attach to a city pole — a “bolt-up” as they are called in the scene. I parked my car and turned off the engine. It was around midnight, and before stepping out of the car to do the deed, I scanned the horizon to see if anyone was around or awake. The streets were quiet, with little traffic, but I did notice a man sitting in a car about a half a block away. He looked nervous, suspicious. I guess maybe it takes a criminal to spot a criminal, but I knew he was up to something. So before proceeding, I decided to first see what he was up to. He sat there, watching cars go by, watching the traffic, and sure enough as soon as the coast was clear, he hopped out of his car, grabbed a sign from the backseat, then zip-tied it to a light pole! He quickly got in his car and drove away. As his car passed mine I looked in his backseat and saw a stack of political campaign signs for a local candidate. I laughed and laughed at crossing paths with another surreptitious sign-placer in the night.

The legality of putting up campaign signs is a very grey area. Same with street art. Graffiti is almost always illegal, as you are typically drawing or painting directly onto someone’s property. But with signs or bolt-ups you are attaching something to someone’s property. Less permanent means less illegal. If a cop asks you to take down whatever it was you just put up, you can usually take it down and be okay.

But just because you might be able to talk your way out of trouble, that doesn’t mean you are “allowed” to put up political campaign signs outside your own property. Technically, legally, you are almost never allowed to put a political yard sign anywhere other than in your yard. On the light poles, on the corners, in the fences, along the highways, none of those are supposed to be there. Yet we see them because it is socially accepted. Just as graffiti is sometimes tolerated, so are illegally placed political signs.

What about stealing them from public places? Is it okay to take down a sign stuck in the median at an intersection? Or one stuck in the grass by a stoplight? If you aren’t afraid of confrontation, there is very little legal recourse to be worried about. Those signs are not supposed to be there in the first place, so in most cities you could get in more trouble for putting up the signs than you could for taking them down. Of course, if someone with opposing views happens to see you then you might have other kinds of trouble, so be careful out there.

No matter what happens on November 3rd, there will undoubtedly be plenty of material for new signs and new messages. As artists we can keep exploring those grey areas of what’s socially acceptable. If we don’t fight the power and push boundaries, who will?