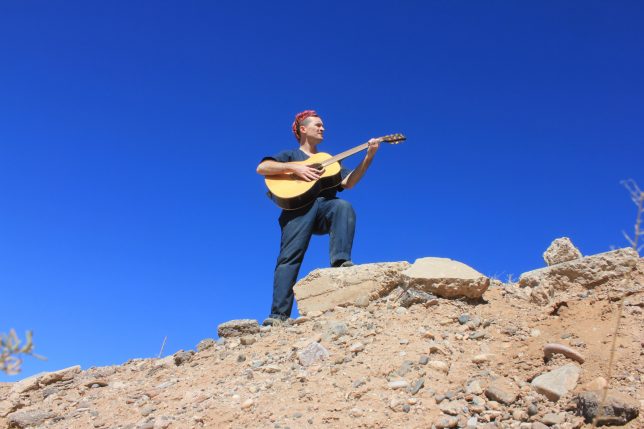 I started playing guitar about 12 years ago. I was living in Chicago at the time, and had drummed in a few rock n’ roll bands, and sang in a couple of punk bands. When I finally picked up an acoustic guitar, in my late 20s, I tried to write rock and punk songs. I’d strum fast and sing loud, but it just didn’t sound right. I struggled for weeks before it finally dawned on me that the songs I was writing were country, not punk. I slowed down the music, and started singing instead of screaming. Suddenly the songs made sense.

I’ve been in a lot of rock and punk bands over the years, and have attacked show after show with blatant fearlessness. But when I was home, alone with my guitar, I kept writing country songs, songs which I’ve rarely played for anyone. When I front a punk band with a wall of sound behind me, I’ll do anything for attention. But when it’s just me and a guitar? Anxiety overwhelms!

The problem is, I really like my songs. I think I tell a good story. As a zinester, a writer, and an artist, telling stories is what I live for. Year after year I would tell myself that it was time to record a solo album. And year after year I’d find an excuse to procrastinate. But COVID-19 called my bluff, invalidating my reasons for reluctance. No more excuses. 2020 was the year I’d finally record my first album.

Certain hang-ups were anticipated and dealt with. Equipment failures, computer problems, and of course a recurring depression. I powered through and kept recording. But a month into the process I was caught off-guard by something I had not anticipated; being called out for my racist lyrics.

Most local studios were temporarily closed due to the lock-down, so I recorded at home. That’s probably for the best, since I think I would have been too shy to record in front of other people anyway. Song by song I recorded music, then vocals. I immediately realized that I needed help from someone with recording experience, so I reached out to a long-time friend of mine. Not only was he a good friend and former bandmate, but he was a hell of a musician himself. While I had avoided recording my music for years, this guy records something every week, never concerned with touring or playing shows, simply satisfied by creating new music.

I emailed him a few of my songs. He loved them, worked with them, made them sound better. He was great. He’d ask permission to add in his own parts, then send me a brand new version of my own song. Maybe with drums now, or a bassline. This was how music gets made in a quarantine, and we were making real progress.

We’d knocked out about two or three songs, when one day I got a voicemail from him. He had a problem with the most recent set of vocals I’d emailed, saying that he thought they were racist and he didn’t feel comfortable working on that song. I was taken aback. After working so hard to overcome my stage fright I was completely caught off-guard when criticized for my lyrics. “So you mean my guitar is in tune? And my singing is on key? Great! Oh, but my lyrics are racist? Shit….”

We shared a few phone calls and sent a few emails. My first instinct was to defend my lyrics. Explain to him why they weren’t racist, assuming he just didn’t “get it.” I mean, I’m not racist, so how could my lyrics be racist? Obviously this friend I’d known for 20 years was being uptight and overly sensitive. But we kept talking, and he made a couple of good points, so I told him I’d think about it.

It sucks getting called out, whether for racist behavior, or sexist or anything else inappropriate. But it sucks even more to not get called out.

It was a big decision for me, for a lot of reasons. For one thing, I believe in the essential freedom of an artist to do or say anything they want, and I didn’t like being told what to do or say. I didn’t want to change my lyrics just because one person didn’t like them. For that matter, I wouldn’t want to change the lyrics just because a million people didn’t like them. The only thing that really mattered was whether or not I liked them. But now this conversation had forced me to reexamine my own work. A song I’d been singing to myself for 10 years, a song which carried a lot of history and emotions, even if only in my own mind.

I took my time. Contemplation don’t come easy. But eventually I realized that I agreed with him. I sat down and re-wrote the lyrics. I recorded the new vocals and emailed them to my friend. But it was too late. Both my musical relationship, as well as my friendship with him had ended. After all that, he no longer wanted anything to do with me.

The anger and sadness I felt at losing that friendship overwhelmed me. I deleted his number from my phone and blocked his emails. I deleted all the files we’d worked on, and didn’t touch my guitar for months. I felt ashamed, embarrassed, angry, misunderstood, stupid, and vulnerable. All of it at once. Any time I thought about my songs, I’d think about him, and our lost friendship, and just spiral into depression. What bothered me most was that he knew me. For years. He’d read my books, read my zines, come to my art shows. If I was a terrible racist person, wouldn’t he have known? But I guess my one fuck-up was enough to erase all the good. Or maybe I was barely tolerable the whole time, and this was the last straw.

My mom said I should call the guy up and thank him. Thank him for calling me out, for forcing me to take a close look at myself. I’m not there yet, and I don’t think he’d answer my call anyway. I’m still too angry to thank him, but I am thankful. I like my new album, with the revised lyrics, more than I would have liked it with the old ones. Changing the lyrics was the right thing to do, as embarrassed as I am to say it. This whole situation reminded me of a Propaghandi song, called “Apparently I’m a P.C. Fascist.” The song is about animal rights, but also so much more. Towards the end is a line where the singer says, “I’ll call you on your shit, PLEASE CALL ME ON MINE.” That line blows me away, the volunteering of one’s vulnerability. It sucks getting called out, whether for racist behavior, or sexist or anything else inappropriate. But it sucks even more to not get called out.

But, for better or worse, this pandemic outlasted my wallowing depression. I spent the summer feeling dejected, but by fall I started recording again. I found someone else to help me with the mixing and mastering, which ended up being its own amazing experience. And now, after months and months of work, my first solo album is finally coming out this month.

Being an artist means putting yourself out there. The deeper and more real your expressions are, the more you set yourself up for criticism. Sometimes it’s tough to sift through which criticism to ignore, and which to pay attention to. Now that the album is done, I am putting my heart and soul up for examination on a whole new scale. I’m so nervous, but also very excited. I hope everyone loves it, but it’s okay if they don’t. Because I love it, and I’m proud of it. And I’m already making plans to record a follow-up.

Billy’s hosting an album release party at Pyragraph TV (our YouTube channel) on Friday, Feb. 26 at 7pm Mountain Time. Come check it out!

You can download Handshakes, Fist Bumps, Hugs, and High Fives at Bandcamp: iknowbilly.bandcamp.com