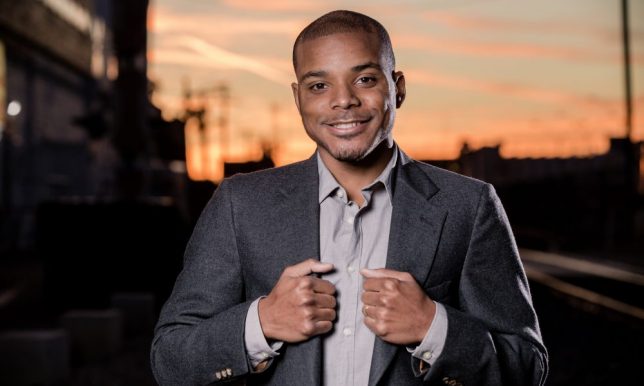 Nick Phelps is a music producer living in Seattle. During the pandemic, he focused on bringing his skills online to create a course called Make That Sh!t Modern. He teaches contemporary methods and sounds that will help people get their music synced in TV, film, commercials or video games. He brings powerful guests from the music industry to talk to the small group online. But mostly, he’s fun.

The world of sync licensing combines songs with moving images, requiring the musician to cooperate with the business and legal side of music production. Sync placements are usually orchestrated between the music supervisor (client) and a music publisher. Music supervisors are in charge of specific projects whether it’s a TV show, a film, trailer, a video game or an ad, working with reputable licensing agencies, music publishers or individual musicians who can fulfill a creative brief, and categorize and submit their music accordingly.

How I met Nick

To be honest, I’ve had a lot of bummer, low-vibe experiences with musicians as if we’re in a dog-eat-dog world. This changed when I met Nick through an L.A.-based sync class I took while holed up at home early in the pandemic. He was one of the mentors. Everyone he works with is professional, humble, positive and encouraging with a room-for-everyone mentality. Hanging out on a Zoom chat for Nick’s free Facebook group Music and Life Mindset, I felt blindsided and blessed when he announced my name as the full scholarship winner for his upcoming Make That Sh!t Modern course. 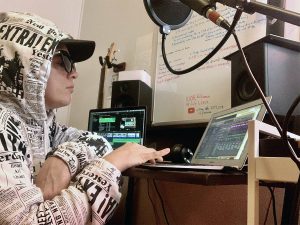 I had such a great time learning specifically what does NOT make a track feel modern. I’m currently collaborating on a song with a classmate from the group, and I want more people to know about Nick and his world, in case anyone else feels called to learn from him, whether they’re an absolute beginner or a veteran at this. Details on his class are at the bottom of this article.

His approach is to deliver information quickly and clearly while breaking down the process into snackable tasks. Most importantly, he wants people to have fun during the process and not be scared to try something new on their DAW (stands for “digital audio workstation” — i.e. Logic Pro, Pro Tools, Ableton, etc.).

Nick says that about 15% of his music gets placed, including in music libraries and sync licensing. His first sync placement was in an online commercial for Nordstrom Rack. He was totally shocked, he said, and then his next placement came with Biggest Loser (his beat was playing while somebody was running on the treadmill.) He also got placements on Temptation Island and with Adobe, which took a couple of his songs for their new app Adobe Rush. That means you can add his songs to whatever video you’re creating on that app. Then there was a makeup commercial in Germany which he has never seen but he got paid, split three ways. OK, let’s get this interview started.

Power of a positive mindset

Eva Avenue: Before we get more into modern music, let’s talk about mindset. That seems equally, if not more, important to you, and a positive mindset seems to be at the core of your messaging. Where does that come from, for you?

Nick Phelps: Growing up, I always had the mindset that this could all end quickly. So I wasn’t really able to enjoy a lot of the good moments ’cause something bad always happened. And then also I know what it feels like, as a producer, to second-guess yourself all the time, even when you’re making tracks: ‘Nobody’s gonna mess with this, nobody wants to hear this.’ It’s why I started my course. I wanted people to be inspired, like, ‘Hey it’s OK to have these feelings, you’re not the only one. But in spite of that, keep going and keep creating. You don’t always have to think that just because something good is happening that something bad is right around the corner.’ 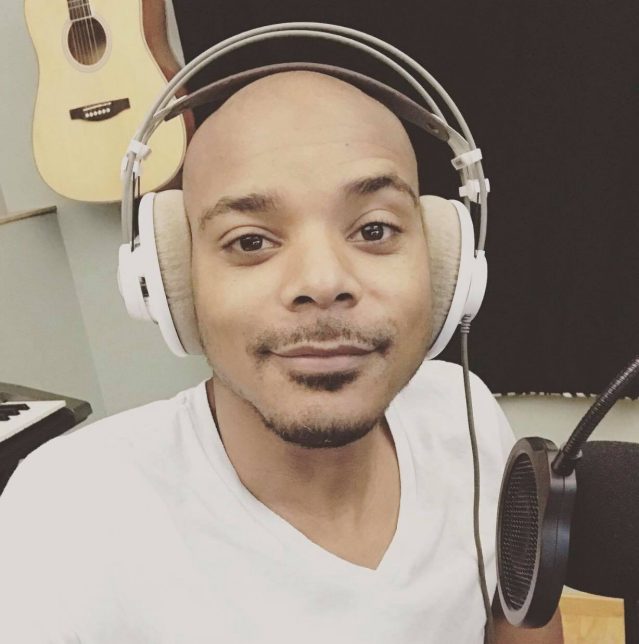 Nick in his recording studio, where he holds his online classes. Photo courtesy of Nick Phelps.

Eva Avenue: Why did you create Make That Sh!t Modern?

Nick Phelps: I created Make That Sh!t Modern because I want to empower people to believe in themselves. That was the main goal. I’ve been hearing people jump into courses and they look at all the modules and they don’t do the modules. There’s a lot of information coming at them all at once. I wanted to create a course with bite-sized pieces where it actually gets you in your DAW; make a beat, but not thinking of making the full beat. Getting in there and making the drums first; little bite-sized pieces.

And there was a huge need for people to make their tracks modern. Part of making your tracks modern, this may sound weird, but there’s this fear of using certain sounds and expressing yourself in art with the fear of what people would think. I used to be afraid of using a certain synth in my sound, ’cause it sounded weird. I didn’t hear it too much on the radio; I was afraid to go for it cause I thought it would be too out there. Whatever you want to do, try it, make it modern. If you wanna put a duck in your song, buy a duck and make him quack. Make a hip-hop track.

Some people might be wondering why they have to modernize their tracks. Why is it important?

I want people to have a fighting chance. A lot of people don’t understand that you can’t just pull out an old Casio keyboard and start making a beat and think that’s gonna compete. I wanna give people a fighting chance in the sync world. I wanna give people permission to stand out in their own way. My course takes a deep-dive into what is modern and what’s not modern. It’s not just sounds, it’s the structure, the way you phrase something, even certain words that you use. So there’s a whole bigger picture of what modern is than just sounds. I wanted to kind of give this whole well-rounded view of making it modern. 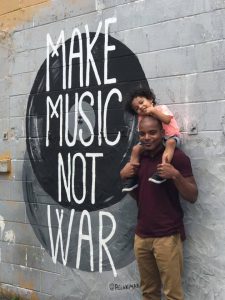 Nick poses next to an important message with one of his four children. Photo courtesy of Nick Phelps.

Talk about your workload. How many hours, honestly, realistically, do you spend making music?

Since I am doing this full time now, oh my goodness gracious, I’m at the DAW at least seven to ten hours a day. I am producing for other people. I am getting sync briefs and then producing my own track for that sync brief. I am creating content for marketing myself as a producer, marketing my course and then that’s it, really. Also, top-lining tracks for other people because I also do work for hire, rapping, and then I’m also songwriting. I’m at this DAW a lot. I do take breaks to play Mario with my son, kiss my wife, eat dinner.

“He murdered my beat!”

You’re killing it on the content creation. I watched your video where you murder the beat and I thought it was done, it was already so funny, and the detective comes in for a whole other scene!

I woke up like ‘if I murdered a beat, there’d need to be a detective!’

What sort of person is your class for?

People that take my classes are on all different levels. I structure it for complete beginners ’cause I’m taking you from ground-level zero, but there are some seasoned veterans in there who are like ‘whoa, these tips and tricks you’re showing, I never would’ve guessed to do these things.’ Layering, sounds, dynamics. And the guest speakers I bring in, they’re bringing so much value for the people who are really good, advanced producers. They’re able to learn from these seasoned veterans, so it’s a well-balanced course for beginners, intermediate and advanced. 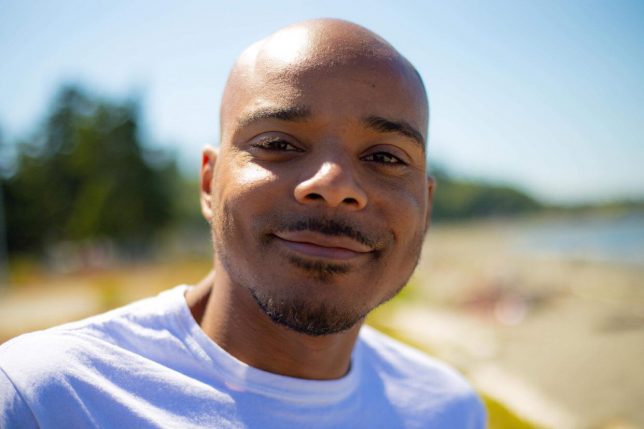 Nick takes a sunny break from the grind and encourages you to do the same. Photo courtesy of Nick Phelps.

What did you go through to get where you are today?

Let’s go back to the beginning. I remember when I was 14, my brother brought home a Yamaha DJ keyboard. I gravitated toward it and started messing with the drums and while I was building this beat, my brother’s friends were like, “Your brother’s got some skills!” So I stuck with it and went to Fruity Loops. I thought I sucked but all the people would come over from the neighborhood and freestyle to my beats. I didn’t start rapping till about 17. I just kept it up.

I’ll never forget, I think it was in 2009, my brother had some contacts in L.A. We got a call from Nipsey Hussie, he was gonna use my beat, we were on the phone, ‘we have the beat, we just need a chorus.’

At the same time, Avril Lavigne, when she was signed, they reached out to us and said ‘hey, can you guys come up with a beat?’ (I was like) yeah? How the heck do you even know us?

How did your brother have these contacts?

He was working at USC and had all these contacts.

Falling apart to come back together

Then also around that time, there was this publishing company that had my music signed to them. They had some contacts with MTV, with reality TV, and then all that fell through the cracks. Every single thing fell through the cracks. But I’m so grateful ’cause I wasn’t prepared mentally to go through that door. I would’ve sabotaged my whole family. I was producing music 24/7 and wasn’t balancing it well. I gave up music for three years afterward ’cause I was in such a rut. But I am a strong believer in God and I believe all those doors closed for a reason.

That’s when I also found out that I wanted to be a chaplain ’cause I love people. When I laid down music for three years, I started doing a lot of reading, a lot of self discovery. Talking to people within my Christian faith, I realized within confusion and that led me to discover who I am as a person. There was a lot of inside work done and when I picked music back up, there was a balance.

I can do all the things now. I can go back into this industry and still balance time with my family. Having a lot of children, four children, balancing music out, it allowed me to work faster and I have to believe in myself. I don’t really have a lot of time to second-guess myself cause I gotta get this done. What really helped was hearing other people say how good I was and that helped me to believe it.

Next session starts August 30 and runs through October 30, 2021. After that, he has a new cohort starting mid-November. The group meets Saturday mornings. Once a student finishes, they can keep the party going, learning from the best in his alumni group Class Dismissed.

Cost: $549 for the course. Payment plans available on the site.