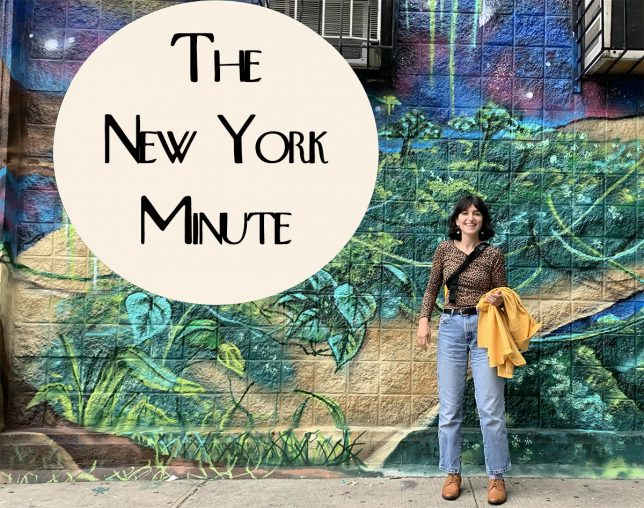 In our first installment of The New York Minute, we explore the uncertainty of juggling freelance work due to the commonalities of late pay and ebb and flow of assignments, leading the writer to take on as much work as possible to ensure there is always a job. Writer Phoebe Mogharei began her New York journey in 2013 as an intern with Gotham Writers, a workshop enterprise supported by its publication of the same name. Afterward, she enjoyed a run as assistant editor at Chicago Magazine. Since moving to Brooklyn full-time in January 2021, she helps sustain herself with a robust network of freelancing gigs. It is projected that  by 2027, 50.9% of the U.S. workforce will be freelance.

Eva Avenue: How are you finding New York?

Phoebe Mogharei: I’m finding New York slowly. I moved in January and most things were closed. Everything has been opening up briefly until it doesn’t open up anymore.

‘Cause the Delta variant?

Yeah. It’s a great place to meet anyone who is interested in people, which writers and artists are. You can’t avoid them; you’re just inundated with them constantly. Even in a big city like Chicago, you can avoid them. And so it has been hard to get into that aspect of New York, being around people all the time.

Have you spent much time in Central Park? Sometimes I can get a moment to myself disappearing into the trees and boulders off the trail.

I literally haven’t experienced being away from people in Central Park. I grew up in the country, rural Wisconsin. I was not around people for most of the time.

I feel like I exclusively have side jobs, I have a ton of little jobs that I piece together to make enough money to survive. And I think the biggest issue is, I mean, as a freelancer…

…which is a modern day cowboy…

(laughs)…. The biggest issue is that in creative industries deadlines are very variable. I’ve been promised something that would be a huge job since June and I still don’t have it and I understand they’re going through internal edits, but I can’t just rely on that. It would be a big chunk of money, I have to do all these other things that ensure I get money. I do fact checking for a civic newsroom called City Bureau in Chicago — they’re a nonprofit. They do fellowships — people who don’t have experience in journalism but want to get into it. It gets anyone in Chicago to go to public meetings and take notes. I fact-check some articles for them.

I’ve never been interviewed, this is hard!

I do that, and then, I run the Instagram account for Belt Publishing and occasionally do other publicity research for them. I do freelance publicity for individual authors who are publishing a book.

May I ask how much you charge for freelance publicity?

I’m charging, per project, $500 which equals out to, since it was the first one, I didn’t know exactly how many hours it would take, I probably put in ten hours. I probably put in way more than ten hours, maybe 20-30 hours to be honest and then I have another 7-ish hours left on it. So it’s not a great hourly rate but it was my first time doing it so I didn’t even know how much work it would entail. I’ve done this work but I haven’t done it just myself.

The flat rate is good for these sorts of projects when you’re starting.

I felt I had to learn the process…the rate was handed to me from the hybrid press. This is what we quoted the author, even though you’re freelance and not affiliated with us. They recommended I take 10-20 hours.

So you got that through your job?

I got that through Parafine Press, which is Belt’s hybrid publishing arm.

I think definitely a lot of my bread and butter has come from the product writing for ARTnews which paid me like between 70 and 100 dollars per round-up that I did, and I was doing anywhere between two and five roundups a week.  There was never any interruption, never any delay.

How did you get the ARTnews gig?

Through my friend who had written for them in an editorial capacity. Somehow she started doing that and they were always looking for more writers. Specifically for the product section.

Tell me about writing product reviews for ARTnews.

They create a selection of five products for a bunch of art and art-adjacent products, anything that ostensibly an artist of any kind might use. One was air conditioning units that could be put in a studio. And then you would research that product, organize them into a list of all these specific rules of how it had to be laid out, what words would appear cause it also would appear on amazon.com as well as Art News. It was technical writing that was supposed to be conversational. We were given the products to recommend but we could be honest and stuff, we could say where is the downfall, if it wasn’t high-quality. It wasn’t like you had to be creating advertising copy necessarily.

Can you tell me what you learned from the Gotham Writers internship? Their writing classes are expensive!

The biggest perk was I could take one of their classes, Another part was hosting the write-ins. The write-ins were the accessible thing, you drop in and pay 25 dollars, get a classroom, free write for half an hour, and get feedback. There was an instructor in the room who gave you instant feedback. You write with a group of people for a night and you get wine and cheese.

Do they still do that?

I don’t know, I haven’t looked into it. But it was cool. My biggest thing that I learned was, well, honestly was — what first comes to mind — is after that when I was in Chicago, some people who were writerly types would be kind of like, ‘Oooo Gotham writers, that’s the company who bleeds wannabe writers of their money, it’s not for real writers. If you go there, you’re not actually a writer.’

It was a very snobbish attitude toward it. I don’t know if… it’s so ubiquitous, they have their catalogues in little boxes on the street, but honestly, the being in the class that I was allowed to take for free was great.  The internship itself was a lot of… it wasn’t super well organized.

Was the internship paid?

It was unpaid. For two months, yeah. But taking the class — it was a really good class, good instructor — a lot of very different people who had different careers, most people were career people, like nurses. I took personal essay writing, so it was nonfiction. Or, essay drafting and we did a personal essay. It was great to read other people’s writing, too, who weren’t literary types.

You mentioned earlier Chicago’s attitude toward Gotham Writers. Is it the price? Why were they snobby, do you think?

I think for some people, I think it was partially the price, partially like I think for some people who are writers, they don’t like the idea, which is the Gotham Writers slogan, is basically ‘everyone has a story to tell.’ I think that’s sort of their attitude. They are a for-profit institution, of course they want people to take their classes, but that’s genuinely what their classes are modeled on, but for certain literary people they don’t believe that. Partially that’s, um, partially a mistrust of for-profit writing schools.

They didn’t claim everyone is talented in telling their story, just that everybody has a story. 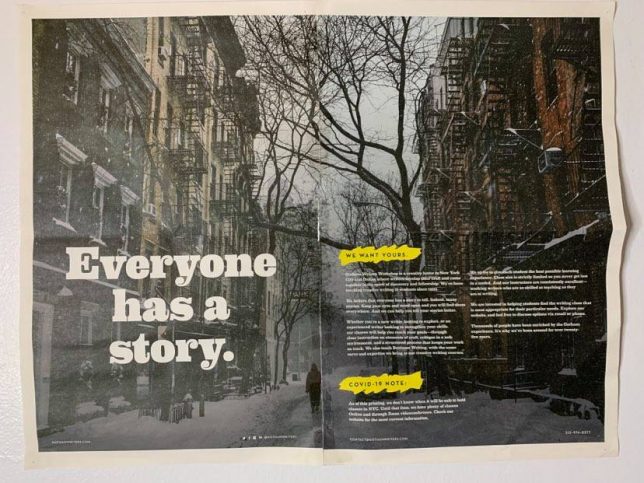 Spread from one of the magazine-like course catalogues for Gotham Writers Workshop. Photo credit: Eva Avenue

The New York Minute is a recurring column by Eva Avenue interviewing creative professionals in New York City. If you have an idea for someone to interview who owns a company, works for a company, or is self employed in the fields of theater, film, writing, visual art, music, design or creative marketing, shoot her an email at studio@evaavenue.com.