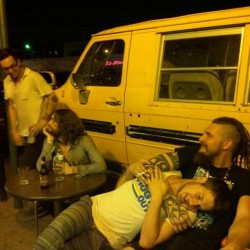 I say all this in order to give you some understanding, when I propose that recording an album is a process or even ritual that can only be described as magical.