Lauren Myers is a born-and-bred Burqueña, which means she savors watermelon mountains, endless blue skies, and has an incredibly high tolerance for heat (she’ll dare you to a chile eating contest any day…). She received her BFA in Theatre Performance from Chapman University in Orange, California. Myers is an actor in numerous indie shorts and features, and in many recurring and co-starring roles in television, webisodes, and features. She is best known as the WAC Jeannie in WGN’s atomic hit “Manhattan,” playing opposite Michael Chernus (“Orange Is The New Black”), as well as the ever-so-slightly insane girlfriend Fiona on the hit web series “Enter the Dojo.”

Myers is the co-creator, producer, and star of the feature-length film Dead Billy. She also produced and directed the award-winning short “Imagining Vera” though her company Lumos Productions and with co-producer/writer Elizabeth Dwyer Sandlin. In 2010 Myers teamed up with Artistic Director Amelia Ampuero to found Duke City Repertory Theatre.

Myers lives in Los Angeles with her fiancè/partner in crime Rick and their pup Marty McFly. 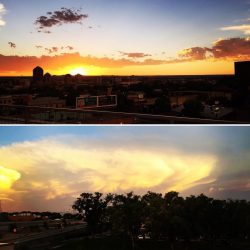 Fear can be empowering, it can be welcoming, it can even be wanted. Fear is that strange vibration in the cavity of your torso, a buzzing pad of energy that occasionally whispers “You could fail.” And on really bad days it says, “You could get eaten alive out here.”