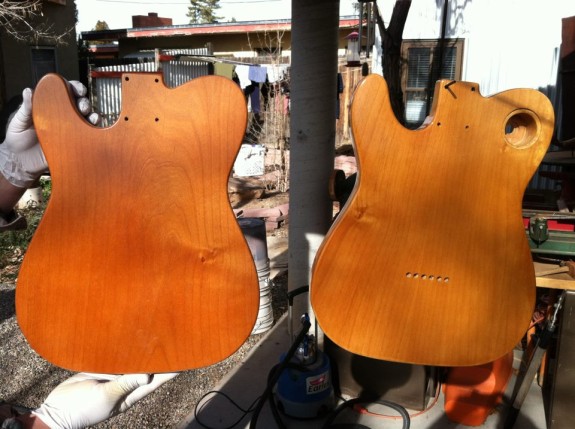 When I look at a Telecaster, the first thing that strikes me is how it came into existence.

I’m not worried about the store where it was bought, the weird uncle with musical relics in his closet or even the pawnshop down the street with sun-bleached guns and guitars in the window. No, I think of the moment when it changed from a chunk of wood and hardware into a guitar.

Where does this phase-shift happen? Is it at the “hands” of mechanized robots overseas? The hand of a trusted luthier? Does it just happen and nobody cares? To a select few of us guitar geeks, it means a whole lot and it tends to spark conversations about people building their own guitars.

There’s something beyond engineering and physics when a piece of wood is bolted onto another piece of wood with electronic pickups. We’re no longer just dealing with simple inanimate objects. We’ve created a sort of tool/instrument/device capable of evoking emotion. There’s something bigger at play when we contextualize a guitar: We’re making an extension of ourselves.

Little by little this slab of wood became four distinct Telecaster bodies, each with their own beauty marks, personality and blemishes.

Imagine pulling that dream axe off the shelf and plunking away at it. The goosebumps, the close study of the woodgrain, the closed-eye jamming under fluorescent lights, the ritual connection with the instrument. Something happens to us when we play this guitar, some primordial core ignites with a mojo flame, through distorted riffs. To play a well-set-up guitar is almost intoxicating, but to be involved in the creation of the guitar is sublime.

Jason’s a dear friend of mine, musician, expert wood-worker and fellow Telecaster enthusiast. In addition to making beautiful beehives and growler cases, Jason has earned his merits as a phenomenal Telecaster builder. Within the dusty confines of his Albuquerque woodshop, amid Slobberbone albums and Rivet Gang posters, some truly exceptional guitars have been brought into this world, and into the hands of fellow Tele-freaks.

I remember the day I went into the shop to see the slab of reclaimed redwood that would eventually yield four Telecasters, one of which I was lucky enough to claim for myself. I was mystified and amazed, dumbfounded by the process. Little by little this slab of wood became four distinct Telecaster bodies, each with their own beauty marks, personality and blemishes. Weekly we’d meet to sand, drink beer, listen to music and sand some more; eventually I’d drive home smelling of pine and wood glue. Bonding and building Telecasters. This encapsulates Tele Club. 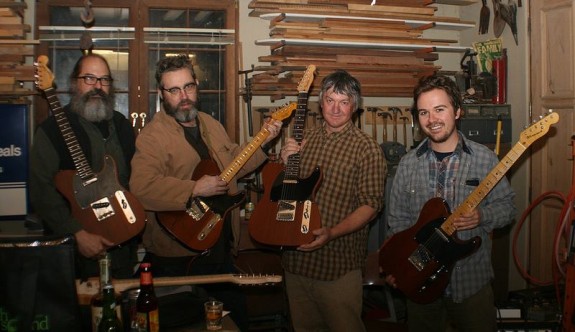 Through playing the instrument the majority of my life, I’ve realized just how special they are. I’d always overlooked the precision that goes into a seemingly simple guitar, and I was completely detached from the work that goes into making a single guitar. By sanding and finishing, the Telecaster and I developed a bond, almost like I was birthing this red pine…bear with me.

This connection with the Telecaster would not exist if I had gone to a chain store and picked it off the wall.

Jason had me participating in every single step of making this piece of wood into my guitar. I remember the night I put strings on it for the first time, even before the electronics were in: It was like hearing my child speak for the first time. Oh, they grow up so fast; I remember when you were just a sapling…. The first night we plugged it in was almost ritualistic, offering PBR alms to Roy Buchanan and Jimmy Bryant.

I don’t mean to ride this high horse too long, because I know that every instrument has a story. Even a pawnshop behemoth covered in Black Flag stickers or something sparkly at WalMar—I mean Guitar Center—has something special to offer.

We make the instruments our own because they really are extensions of ourselves, and they transmit our emotions.

As easy as it is to get caught up in what you’re playing, it’s so much more important to consider how you’re playing. Take someone passionately playing a $100 guitar and you can be moved to tears, but someone hacking away on a $4,000 PRS will make you cry, too—for other reasons. I feel fortunate to have an instrument that came out of a small woodshop in Albuquerque that carries the memories of beer-fueled sanding, oil-stained hands and shirts, and a growing friendship.

Without meaning to, or even without wanting to, Jason has created a community out of his guitar-building.

Members of The Handsome Family, The Saltine Ramblers, Wildewood, and The Chuck Hawley Group all sport “Finkcasters” (a name not yet used by Jason, personally).

For me, I don’t know a better reason for musicians and friends to come together than a mutual love and respect for the Telecaster. The email threads among us gear-geeks will make an arduous novel someday, and the spare parts shared among Tele Club members would supply a guitar store indefinitely.

Perhaps my favorite element of this clubhouse is the informal discussion, the jokes and the soldering help. The takeaway, though, is there’s a group of Albuquerque musicians playing these guitars. Guitars that they, themselves contextualized, by sanding, finishing, bolting necks on, wiring electronics, etc. These guitars all share a similar story and they all came out of the same shop. My next goal is to persuade Jason to start on some lap steel guitars….