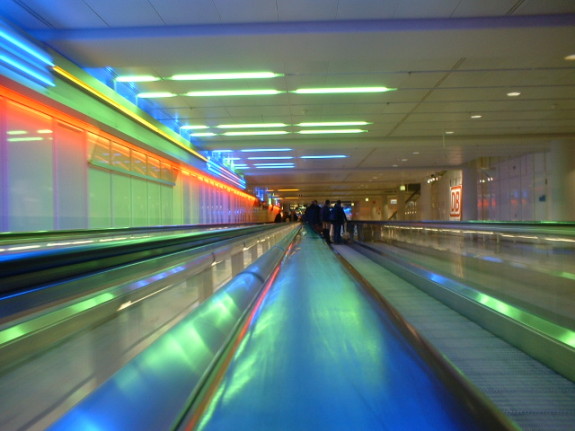 When I got out of college I was determined not to get a real job.

I signed up with a temp agency—my plan was to work just enough to pay the bills and to spend the rest of my time building my career as a freelancer.

And then I tripped.

On the way back from visiting my father on the East Coast—he had paid for the plane ticket—I tripped over my carry-on bag and my foot got twisted in one of the loose-hanging arm straps. The pain was unbearable. I didn’t want to tell anyone in the airport for fear that they wouldn’t let me on the plane. It was a six-hour trip, with a layover in Chicago. So I got the plane, took the ice from my complimentary drink, put it in the ziplock bag I had brought for my toothbrush, and shoved the bag in my sock against my rapidly swelling ankle.

The pain didn’t let up. By the time the plane arrived in California, I hobbled my way to a cab and went straight to the emergency room.

It was diagnosed as a sprain and I was given crutches, a prescription for Vicodin and a medical bill I couldn’t afford. The next day my foot had swollen to the size of a small loaf of French bread. Every time I put weight on it, it felt like knives and splinters.

I called my temp agency to let them know that I was available—I needed the money—but that I was on crutches.

Since most of the jobs I was getting at the time involved manual labor, I did not receive any calls. And I was running out of money. In a few days I was desperate. I headed to the welfare office.

After filling out a stack of forms I was sent to a room where a taciturn federal employee was lecturing a group on what to do with the welfare checks we hadn’t received yet. We were not supposed to spend them on beer and cigarettes. This was by no means a permanent solution, and we were to get off our lazy butts and actively seek gainful employment.

I felt like standing up, pointing at my French bread-sized foot and telling this woman to fuck off. The self-righteous part of me wanted to chastise her for all the assumptions she was making about all the people in that room. But a different self-righteous part of me was thinking something else. I was better than all these other people. I didn’t even drink beer. I had a legitimate reason for being there.

My welfare application would, of course, take time to process. In the meantime I was given food stamps and bus passes. I had next to nothing in the bank, but now I had food and a way to get around. I couldn’t pay my rent, but I could at least buy groceries. I should have been grateful, but all I felt was entitled. After a week or so I ran out of painkillers, and my foot hurt like fuck, but I had food.

Every week, I waited in line to get my food stamps.

It was as if, at every step, the whole process were deliberately designed to humiliate me. The crutches and my cartoonishly swollen foot and the pain — all of it made waiting in line that much more an indignity.

But I still had my self-righteous conviction that I was not one of them. That my reason was legitimate and beyond my control. Sort of.

Maybe if I hadn’t taken on temp work instead of getting a real job, I might have had health benefits, and wouldn’t be in this predicament. Maybe I could have gotten a good job, too. I had a college education. Most of the people standing in line would never have that opportunity. But no, I had chosen to be an artist.

I ended up borrowing money from my middle-class friends and family to pay rent, a choice that most people in my predicament didn’t have. And it was because of all that I had, and all that I had been given, that I had the dumb persistent belief that I could do this impossibly stupid thing: That I could make a living as an artist. I’m sure if I’d told any of the people in that food stamp line what I wanted to do with my life they’d have rolled their eyes and recognized me for what I was.

Someone who came from entirely too much privilege for my own good.

Eighteen years later and I’m still struggling as a freelancer. I’ve made more than a few inroads—I have an agent now. I’ve done some magazine work, raised over 10 grand in a successful Kickstarter campaign to self-publish my first children’s book, and my second book is in what the industry calls “acquisitions” with a well-known publisher.

I’ve had a number of minor, and few major, health problems since, and I wouldn’t have gotten this far if my wife hadn’t been fully employed with the state, and covering me under her insurance. I am very grateful.

For most of us, being a professional artist is a luxury.

It’s built on the foundation of a middle-class upbringing and an education we couldn’t have afforded without our parents. It wouldn’t even occur to most people that such a career was possible for them — people with no less talent or innate ability than we have. People in our situation can only live in a shitty apartment off ramen and fast food for so long before we start to question our choices—and are forced eventually to get a real job, or move on.

You can only pretend that you’re doing it all on your own for so long. Eventually something will force you to abandon your romantic, need-for-nothing, self-reliant artiste self-image, living at the whim of your muse. Other people a lot more sensible than you have it a lot worse, and a lot fewer options.