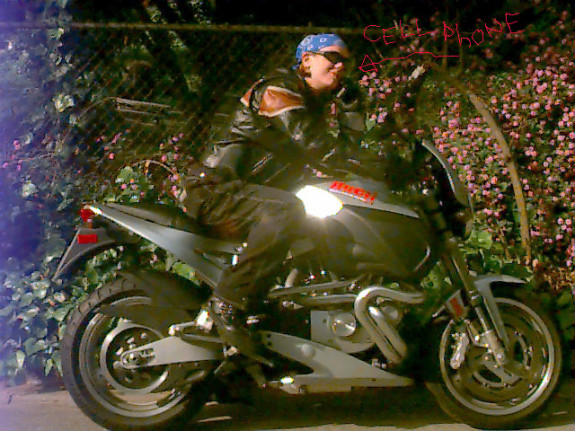 I was go-go dancing at NYC’s Dome Room, a famed industrial/metal club back in the day.

Saw this exotic-looking guy just google-eye staring at my act and thought, he’s either a romantic or a creep. So I pulled him up on the platform and made a spectacle out of him. Turns out he was a little of both and that evening marked the beginning of a fiery two-year affair between me and this well-known guitarist, signed and opening for one of my favorite metal bands on a major US tour. Lucky me.

After months of three-hour phone calls and romantically creepy trinket gifts in the mail, he and I decided we’d both relocate to Los Angeles, get a place together, smoke clove cigarettes under the palm trees and drink soy chai lattes until we had double chins. So we did. Lucky me.

I had lived in Chicago, working musical theater and touring. I had lived in New York City, doing concert dance and experimental theater. I had even shot a few commercials.

But none of that prepared me for how the heck to do business with the Los Angeles film/television beast.

My personal tactics consisted entirely of immediate immersion into questionable acting classes and tearing up the Sunset Strip on the back of a Harley Buell with my guitar-shredding boyfriend, like some kind of a bad gossip columnist’s wet dream. Unstoppable me.

I obviously didn’t have an agent, a manager or a team working with me in Los Angeles, yet. Instead, I’d read the local trade papers like I had always done in Chicago and New York City. Search for a casting, send an email or mail a (black and white) headshot and hope to get invited to audition. Backstage West and Craigslist were the local trade papers back then, but I didn’t know that Los Angeles had a formal system of submissions and casting, and out here it was the no-budgets and skeeves posting in the papers.

So, I was actually successful in my antiquated endeavors.

Until I got a call from some ambiguous producer who wanted to know if I did “A.” Huh? Oh! Uh…not on camera, dude. And early on, I even got a direct booking (every performer’s dream come true). I know I was the first they offered this little movie’s three-line role to because they said so on our answering machine. My boyfriend and I listened, victory-jumped on the bed, high-fived and I immediately returned the message only to be told they’d given my film role to someone else because they “hadn’t heard from me.”

But didn’t they know I was busy balancing a bass guitar and vacuum sweeper on a motorcycle up La Brea Ave., an everyday-errand-physical-comedy-act surely worthy of a front page feature? It was only an hour.

They gave my role away within the hour? I bought a cell phone the next day.

I was a rage-against-the-machine kind of anti-techie until then. I resisted not only the personal computer, but especially the cell phone as long as possible. Now, I know two very important truths remarkably relevant to Los Angeles business:

1. Always be available—even when you are at the Rainbow Room, traveling in Tokyo or on the back of a lawless crotch rocket, and 2. Never date a touring musician.