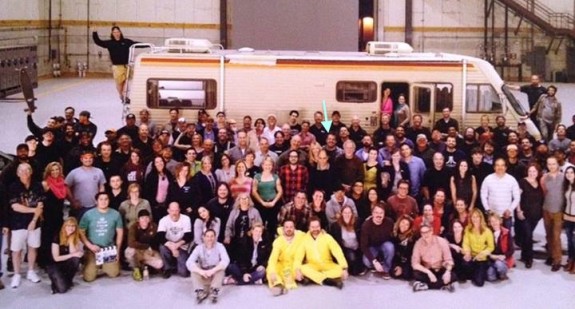 Michael Flowers and the rest of the “Breaking Bad” crew and cast.

A roll of red toilet paper. A subterranean bus-turned-meth lab. The harrowing shell of a suburban family home taken over by squatters and graffiti. Each image of the show “Breaking Bad” is the end result of careful deliberation, creative choices and meticulous execution by some of the top creative talent in the industry.

One of these artists is “Breaking Bad” set decorator Michael Flowers.

As “Breaking Bad” comes to a close this week, I was excited to interview Michael for Pyragraph’s very first podcast. We talked about how he got into the film and TV business and what led him to scoring such an excellent gig with this amazing Emmy-Award-winning series (congrats!).

Stay tuned for more PyraCasts in coming weeks! In the very near future you’ll be able to subscribe and download them at iTunes.

Born in Clovis, New Mexico and having spent most of his life around Eastern New Mexico, Chris moved to Albuquerque about eight years ago and has never looked back. He started podcasting in the early 2000s when no one knew what he was talking about. His main show is 10drinkminimum.com. You can typically find him at one of the many music venues in downtown Albuquerque.

View all posts by Chris Burnett →