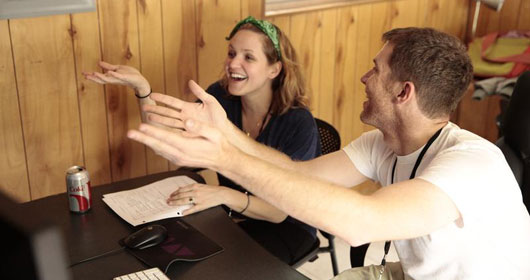 Guest blogger Alex O’Flinn is the recipient of the 2014 Sally Menke Memorial Editing Fellowship. He most recently edited “A Girl Walks Home Alone at Night,” which premiered at the 2014 Sundance Film Festival. As part of his fellowship year, he will work with editor mentors Dylan Tichenor (co-editor, “Zero Dark Thirty”), Stephen Mirrione (“The Hunger Games”), and Douglas Crise (“Spring Breakers”). Published with permission from the Sundance Film Institute.

In April, I got a phone call from Michelle Satter and Ilyse McKimmie informing me that I was the 2014 recipient of the Sally Menke Memorial Editing Fellowship. I had just edited a film for my friend and director, Ana Lily Amirpour (A Girl Walks Home Alone At Night), and during the editing process we were constantly referring to Menke and Tarantino—their style, rhythm, bold choices, and overall amazing collaboration on so many films. To be the recipient of an editing award with her name is beyond an honor and one that reminds me every day to challenge myself within my craft. But it’s hard to challenge oneself without the support of others. Do you work out as hard at the gym by yourself as you do with a trainer? For me, the answer is no. It’s hard to practice in a vacuum. You need a project to be creative on, and collaborators to exchange ideas with and challenge you (and you them). The project gives the work purpose, and I think purpose is one of the most important motivators. Luckily, as a recipient of the fellowship, I got the opportunity to attend the Sundance Institute June Directors Lab as an editor, which allowed me to really dive in deep with some amazing projects for a month.

You can’t stay in the safe zone if you want to make something interesting.

If you take the competition element out of the equation, the Sundance Directors Lab is kind of like a film version of Project Runway. Each week, a director is given a short amount of time to rehearse, shoot, and edit a scene from their script in progress. The time is short to say the least, and the cut-off time is strictly enforced. There are “make it work” moments, moments of incredible inspiration, and, every couple of hours or so, Ed Harris, Catherine Hardwicke, or Robert Redford might stop by to watch you work and give some notes. There’s not a lot of time to second-guess anything, and that’s the point. Go with your gut, take a risk, and if you fall down, you get back up because you have to. It’s a one-of-a-kind environment where everyone present at the Labs is there to support, but also to challenge a director to dive deeper into their story and vision in order to make a film that not only entertains, but also says something. Challenge is the key part of the equation. You can’t stay in the safe zone if you want to make something interesting. You also can’t push yourself out of the comfort zone or make a film without collaborators and people pushing you hard to move closer towards a vision.

As an editor, I was paired with two directors, Johnny Ma and Jordana Spiro, who both came with scripts that were pretty killer. Before the Lab, I was reading the scripts over and over, watching reference films, practicing my AVID skills—I wanted to be prepared. When the day came to start cutting with both directors, I was really welcomed as a collaborator; as an editor, this is the thing you really hope for more than anything. When the director trusts you to help them elevate their vision, the process is addictive. It’s one of the most rewarding experiences to see a scene that really works up on the big screen after hours of work.

But the Lab is not a normal working environment, as you are working with two directors simultaneously. The biggest challenge with this is learning how to switch gears between two totally different projects in a matter of minutes. I would spend an entire day cutting with Johnny, and then I’d meet Jordana, watch dailies, and we’d start on her scene the next day. The luxury of being on a feature film is that you get to 100% live in the world of that film 24/7 and not have to shift gears. At the Labs there is not this luxury, but the benefit is that you get to learn from more than one director at once—about performance, blocking, tone—which are things you will retain forever. 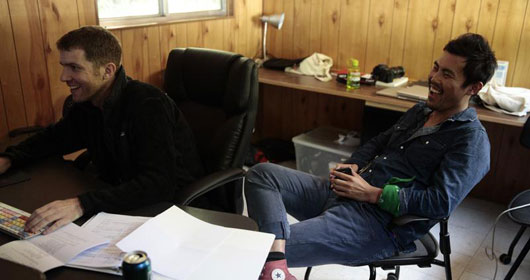 As an editor, I’ve learned that you must always be expanding your vocabulary for how to shape a performance, tone or motivate edits through blocking. This is the language that you will use to communicate certain things to the director while working, and the more of it you have, the better the communication will be. It’s also important to bring the knowledge you have from outside of the cutting room into the cutting room. Jordana asked me to watch a film before attending the labs called Oslo, August 31st. I learned some incredible editing lessons from watching the film, and it helped me understand her vision for her film. Johnny turned me on to old Chinese parlor music from the mid-20th century, and that really served as a motivator to us in how to edit one of the big scenes we were working on. Anything that makes you feel something—film or not—is fair game.

My experience at the Labs was built from many small moments of inspiration and tough lessons, that when combined created something bigger than all of the individual pieces. But all of these lessons come while working hard. Really, really hard. There is no waiting around for inspiration to strike. Everything about the program is set up to make sure everyone involved gives it their all. The benefit is that in the process you find yourself reinvigorated in your journey as a storyteller.

Nothing worth doing is ever easy, and I feel that this is something that often gets lost in many interviews with artists and successful people in a particular craft. I am here to tell you that you are not alone in asking, “Is it really this tough?” The answer is yes, and it is for everybody. This stuff is hard, man! I made BAD movies on my own, I went to film school, I was an Assistant Editor on the night shift, I edited lots of shorts, lots of web content, got discouraged countless times, questioned my life decisions countless times, and it all led me to now, where I feel like I am just beginning to understand what being an editor truly is. The point is, the journey is long, and it’s important to remember that and not get discouraged by that. While the Lab is only a month long, it instills the idea and thematic importance of being willing to go on a journey, and that to make something that is meaningful requires time, effort, and the willingness to fail and start again when all the muscles in your body are begging you to stop.

It is now September, and I’m in the thick of editing a new feature. Every day while editing I do something that inevitably reminds me of something I learned at the Lab. It’s an experience that has forever implanted itself into my editing DNA.