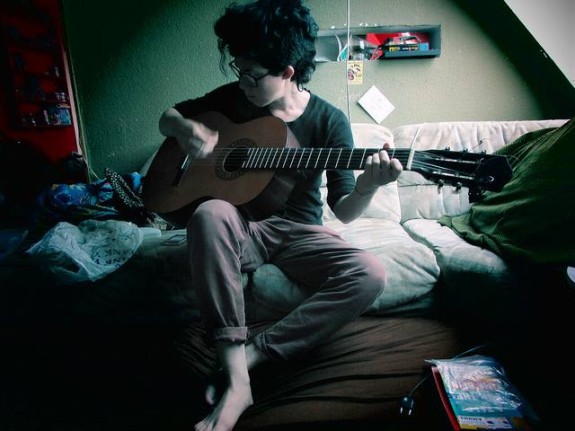 Originally published on Huffington Post. Liam Kelly is a singer-songwriter currently based in Berkeley.

The truth is that the first time I played in a Belgrade rockabilly club two years ago, I was in hiding. It had been that way for as long as I could remember, but it was the first time that it felt obviously uncomfortable to perform in my own body. My musical success was based around authentically connecting with people, yet I couldn’t be real with myself.

Things were really happening for my music. I’d been touring around solo in Europe and had recently played my first show in Croatia when I set up a show in Belgrade without knowing anyone beforehand. I found my band, three guys called Baba Dese, in the graffitied hallway of a giant industrial building called Bigz. With a photo of Elvis and my band behind me, I’d just started into my set when a guy in the audience called out to get the rumbling crowd’s attention.

When touring, the possibility of being stigmatized for being trans was just too great.

But I was not a girl.

Though this moment shook me, I can’t thank this person enough for making it blatantly obvious that something had to change. The way I felt inside was not obvious on the outside. I was assigned female at birth, but I didn’t really identify as a girl or a woman. It was like a small blow to the gut—the first in a series of many over the next two years. Deep down, I had no idea what it really felt like to be a girl, though I’d tried in vain for most of my life to become one.

Since puberty I’ve experienced gender dysphoria but developed coping mechanisms to ignore it. It got harder with age. Having just turned 33 and returned from another month-long tour, I felt more depressed than ever. With every single performance the pain of the lie was perpetuated. (This piece was originally instigated by a request to submit an article to a feminist ‘zine in Berlin. The message arrived in my inbox on the same day that I finally began coming to terms with my own gender. I’m seizing this opportunity to stop the lie and finally come out.)

I’ve always identified as a feminist, and I take pride in my lived experience as female and as someone with a queer sexuality. (I tried identifying as a lesbian, but that never fit me either.) And though I never meshed fully with it, I did my best to accept my assigned biological sex. I’d been afraid to be trans for the obvious reasons, but also because I didn’t want to seem like I’d jumped ship to become a “privileged white male.” Now I know that I can be an alternative example.

Since coming out as queer 13 years ago, and now especially since coming out as a transgender man, it’s been hard to continue viewing the world through a body lens. I now see everything based on how society marks different bodies and behavior. We’ve all experienced life in a sexist society. Every type of “-ism” and phobia is rooted in fear of otherness, what doesn’t look like what we know and understand. Of course, it’s become systematic, but it can change with one person at a time.

My experience as a queer performer in Eastern Europe and elsewhere felt like it had an impact. It also kept me from being honest, because I got hung up on being a “female role model.” It was rare to find a female front person, let alone anyone of any gender writing their own material. Everyone I met was surprised and impressed that I toured alone, playing my own songs and booking my own gigs.

When I get on stage again in Belgrade, I’ll be telling the whole truth.

The situation for queer, gender-nonconforming people in Southeastern Europe is akin to the situation for their counterparts in Russia. Somehow it was more comfortable for me to be perceived as a lesbian (or even straight) than to admit that I was not at all what anybody thought. The possibility of being stigmatized for being trans was just too great. It came down to basic survival instinct. When touring, making a good connection is the difference between selling a CD or not, booking the next gig or not, and having a place to sleep or not.

I toured and toured a lot, basically running from myself. But the more people I met, and the more I made my name, a name I’d never wanted in the first place, the more stuck I felt. I started getting angry. In the summer of 2013, I came back to America to tour and was easily triggered when people “ma’amed” me. At some point my gender struggle became more important than being a musician. I finally decided that I needed to break up the band—this band of one that was fighting all the time.

I don’t know my new band’s name yet, but I’m Liam Orlando Kelly. I like to be called “he”; even though I don’t quite think of gender in binary terms, it is better-fitting. It’s a luxury to write a bio without thinking about gender pronouns. It’s a privilege. (Last year I tried to write a bio without any pronouns, and it took me the entire night.) I have always said I’m “just a person,” but it feels much better to identify myself as transgender. It fits in a way that being female never did.

When I came out to my dad, he related to me by saying, “What’s in my head is often misunderstood or unseen by those who are close to me,” explaining that expressing himself fully is not easy. Life is a series of comings out, whether about gender, sexuality or other human conditions that must be shared. When I get on stage again in Belgrade, I’ll be telling the whole truth. In the meantime I’m set on unlearning the rules about what being a man or a woman is or isn’t. I still identify first and foremost as an artist, as a musician, as a person who lives for connections and experiences. That, along with the hope for equality and understanding between all people, is something that will never change.

Liam Kelly is a recent transplant to the San Francisco Bay Area after four years of living in Berlin where he embarked on his path as a singer-songwriter. He has toured as far as Newfoundland, Western and Eastern Europe and back to the States last summer. After touring constantly for two years he is currently taking things at a slower pace, enjoying a return to visual art and writing while co-habitating with his partner and her son in Berkeley.

View all posts by Liam Kelly →