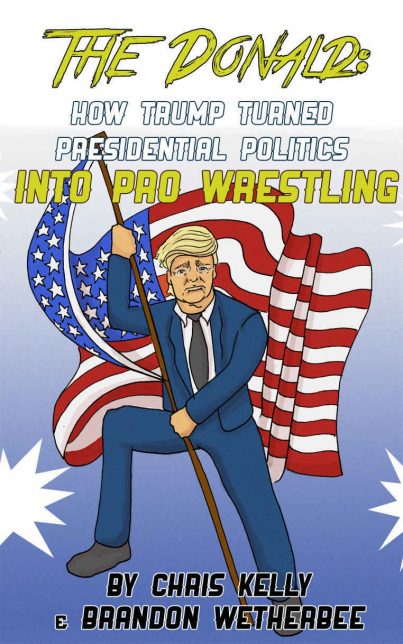 Every election year Americans argue about candidates and policies, then line up with their party’s nominee and that’s just how it goes. Red or Blue, Democrat or Republican. But this year seems a bit different. Very few people seem to actually like Hillary Clinton and even fewer people like Trump. If no one likes the two people we’re voting for, then why isn’t there another choice? Because the system is rigged, duh.

Another facet of American culture that is rigged is professional wrestling. Not that it’s “fake,” it just isn’t real. Sort of like politics.

Authors Chris Kelly and Brandon Wetherbee have not only made this connection, but they’ve written a book about it titled The Donald: How Trump Turned Presidential Politics into Pro Wrestling. What seems like little more than a funny title is actually a lengthy and well-researched book that traces Donald Trump’s history with pro wrestling, plus explains his many parallels with Vince McMahon, the president of WWE.

I got in touch with the co-authors Chris and Brandon through email to ask them more about their book.

Billy McCall: For as silly as the title seems, The Donald is surprisingly well-written. How do you get people to take this book seriously?

Chris Kelly: After the initial laughter that the title might induce, people are surprisingly receptive to the thesis of the book. Usually, we point out a few of Trump’s connections to wrestling—some people don’t even know about the time he headlined a WrestleMania, let alone the two he hosted at Trump Plaza—and we go from there.

Chris Kelly: We’re both straight white cis males who try to check our privilege. Obviously, the potential for a Trump presidency has terrifying consequences for most people. But it’s difficult not to find some gallows humor in Trump’s ridiculous, detached-from-reality rhetoric. So we’re fascinated by that: He’s a heel, but sometimes it’s hard to not be entertained by the bad guy. 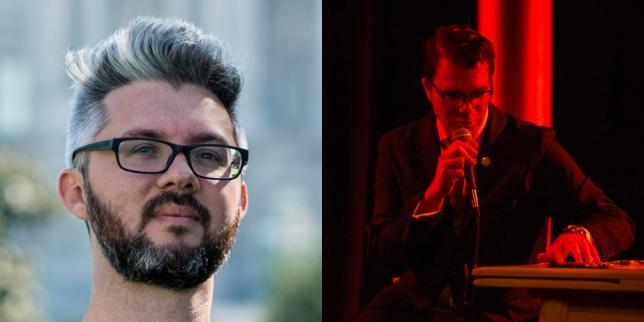 The term “heel” refers to the bad guy in wrestling, the guy who cheats or says offensive things. What makes Trump such a great political “heel”?

Brandon Wetherbee: Simple: He doesn’t back down. Things like reason and facts and the rules are not and should not be respected by the heel.

When you watch wrestling, can you tell when you are reacting in the way that you are supposed to react? Like when a heel makes you mad, but you know he’s trying to make you mad? Don’t you feel like you’re being played? Do you ever feel that happening in politics?

Brandon Wetherbee: Since beginning this project, I have not felt played or even upset. Roles are easier to understand when you understand the ultimate goal, which is heat. Heat translates to popularity. The same things that work in wrestling work in presidential politics and state elections and high school president elections.

Trump has done a lot of things in the world, from running casinos to starring on his own television shows. What made you want to focus on his connections with wrestling?

Chris Kelly: When other people have tried to make sense of this election, they looked to those avenues for insight…and are still trying to figure out what is happening. Once we noticed Trump’s connections with wrestling, the framework let us make sense of things better than other more conventional approaches.

The most recent story we’re hoping to explore is Trump accusing Clinton of doping.

The book does a great job of giving readers a bit of pro wrestling history, serving as a mini-biography for Vince McMahon, as well as Donald Trump. What was your research process like?

Chris Kelly: We spent hours reading books and biographies about both Trump and pro wrestlers; relied on the excellent staff at the Library of Congress; scoured the archives of The New York Times; and watched hours of old wrestling matches, promos and documentaries on the WWE Network.

It was fascinating for me to read about how McMahon blurs the reality between himself as a person and himself as a wrestling character. That happens more and more in our entertainment world and I suppose in politics as well. Who is the real Donald Trump? Does he even know?

Chris Kelly: In wrestling, the best characters are just the wrestler’s real personalities, turned up to 11. So turn down the volume on the character that Trump is playing right now and you’ll get a good idea of who he really is: a misogynistic white nationalist with a hair-trigger temper and a middle-schooler’s idea of how government works…but maybe one who’s a little quieter and less shameless about it. Trump probably knows at some level who he “really” is, but it seems that his grasp on that has gotten looser and looser.

You are each established writers on your own. What was it like to work on this book together? How did you divide up the workload?

We produce a weekly podcast about the intersections of politics and wrestling called The Great American Bash. A weekly excuse to explore these parallel worlds helps keep it all organized.

Every day some new scandal comes out about Trump, or Clinton for that matter. Do you plan on doing a revised edition? Which of the latest events are you dying to dissect?

Brandon Wetherbee: We’re hoping to do a second edition that goes in-depth about the few months between the conventions and the general election. The most recent story we’re hoping to explore is Trump accusing Clinton of doping. The wrestling angle is not lost on us.