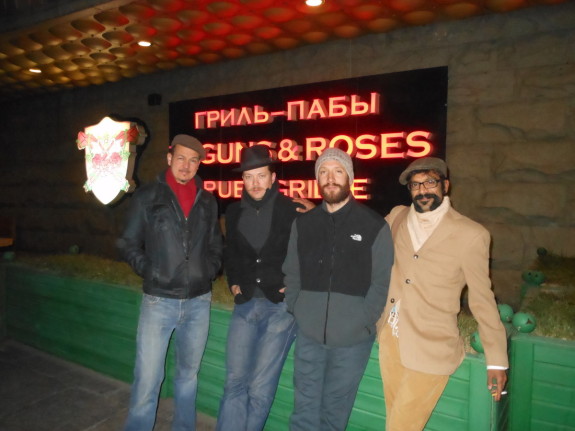 I play in a band called Le Chat Lunatique.

That’s French for “the crazy cat,” or “the moody cat,” to be more accurate. We are a local Albuquerque band. Well, not always local. We have been known to leave the 505 every now and then. Every once in while, we find ourselves playing our unique brand of filthy, mangy jazz for people so far away they’re not affected by the long-reaching tentacles of the Affordable Healthcare Act.

That’s right: Not the USA.

We have been fortunate enough to play in Not the USA several times in our eight-year career. Namely: Serbia, England and Colombia, all of which have been fantastically fun forays. But perhaps the most exotic of them all has been our latest krazy kaper: Kazakhstan.

While I closed my eyes and tried to think of happy smells, Muni declared “It’s actually pretty good!” and proceeded to wipe the foamy white substance out of his mustache and pants.

Yes good ol’ Kazakhstan, that famous country which conjures up images in everyone’s minds of…uhhhhh…ummmmmm…Borat in that bathing suit? Well, I shouldn’t need to say this, but just to set the record straight, Kazakhstan is NOTHING like Borat’s depiction.

And yet, how is it that the world’s ninth-largest country remains such a mental cavity in our collective brain-teeth? Well maybe it has something to do with its effective closing-off to the world by Soviet Russia until its independence in 1991. Or maybe because we are Americans and we are just really good at being bad at knowing about stuff that doesn’t happen here.

Nevertheless, Le Chat Lunatique went there last November and it turned out to be a pretty cool place.

We were in , the largest city in Kazakhstan, which is nestled in a valley at the base of the beautiful and enormous Tien Shan Mountains.

To the south is Kyrgyzstan. Go east and you’ll find yourself in China. Drive north for about 22 hours straight and you’ll be in Russia.

Now, in your mind, simply blend these two cultures together to get an idea of what the very handsome Kazakh people look like. Two things that actually originated in Kazakhstan that we no longer associate with the country: Apples and tulips. On the two-day plane ride there I read a book called Apples Are From Kazakhstan, which I felt was a fairly good introduction to the country. 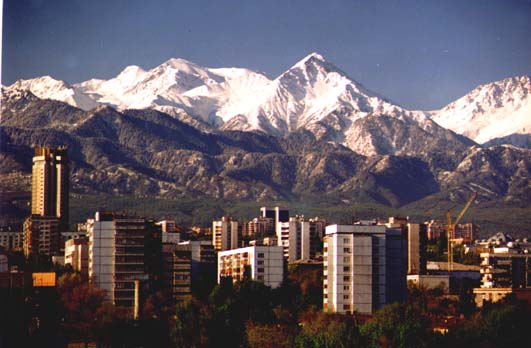 Of all the important things covered in the book, perhaps the two most significant are kumis and shubat.

Kumis is fermented mare’s milk, and is the national drink of Kazakhstan. Shubat is fermented camel’s milk. Muni, our violinist, (and perhaps the most gastronomically adventurous among us) also read the book, and became determined to hunt down these mildly alcoholic beverages. He finally got his wish the morning of our departure. Having found a bottle of each at a grocery store the night before (and not wanting to have to dump them out at airport security), Muni decided it would be a good idea to open a bottle of Shubat in the van on the way to the airport.

Now, being a fermented beverage, shubat is also a bit…fizzy, let’s say. So moments after piling into the van in the pre-dawn, we all heard a small pop and then what sounded vaguely like someone pissing on the floor of the van. All eyes went towards Muni. We could barely make out the silhouette of Muni ferociously gulping down everything left in his shubat bottle that hadn’t exploded.

And then came the smell.

…and yadda yadda yadda, Le Chat Lunatique ends up in Kazakhstan, eating caviar for breakfast and getting interviewed in the Guns & Roses Bar.

There are few things that are meant for human consumption that have had an odor so bad they have actually made me want to retch, but this was one of them. While I closed my eyes and tried to think of happy smells, Muni declared “It’s actually pretty good!” and proceeded to wipe the foamy white substance out of his mustache and pants.

Overall, the trip was great. We played for kids at a jazz school; we played at a swanky night club; we did interviews for TV and radio; we played at a Gatsby-themed ball and for a fancy brunch in a 5-star hotel. We even got to stay in the 5-star hotel—with individual rooms no less! No blow-up air mattresses for us this time. And the whole thing was presided over by the Consulate General of the United States, Almaty, Kazakhstan.

They were basically the whole reason we were out there:

Last summer they hired a fellow named Mark Tafoya, a New York chef and author to do a “food diplomacy” event. Later, when the Almaty International Women’s Club decided they wanted an American jazz band for their annual fundraiser, they asked the Consulate if they had any suggestions, and they asked Mark. He remembered that a girl he used to go to high school with at Albuquerque Academy had a brother, Muni, who was in such a band, and yadda yadda yadda, Le Chat Lunatique ends up in Kazakhstan, eating caviar for breakfast and getting interviewed in the Guns & Roses Bar.

It turns out that consulates and embassies do this kind of thing all the time.

One of their primary duties is to bring bits of American culture to other countries to help foster more understanding between nations. In fact, the Consulate’s Public Affairs Officer, Tristram Perry was telling us he would be needing Native American music at an upcoming function. We told him to contact the folks at the Gathering of Nations. They also brought a bluegrass band a few years back.

If you have a band that could in any way be considered indicative of traditional American music and have a yen to travel overseas, I highly recommend looking into the many US consulates and embassies. Make yourself known. It can’t hurt. And who knows, maybe you too, could some day find yourself guzzling Shubat in a government van in central Asia.

Jared Putnam lives near the Bosque in one of Albuquerque’s oldest neighborhoods, Barelas. He lives in an old house with Pyragraph stalwart Sage Harrington and his two kids Jack and Claire. Jared plays an upright bass equipped with strings made from the eviscerated intestines of a cow. He also enjoys playing his Gretsch resonator guitar and his ukulele.

He plays in the band Le Chat Lunatique. They specialize in filthy, mangy jazz and awkward silence between each song. He and Sage also have a group called Sage and Jared’s Happy Gland Band. They are cute together. Jared also plays silly songs for preschool kids. He can also be seen pulling cans to the fronts of shelves at Whole Foods.

View all posts by Jared Putnam →