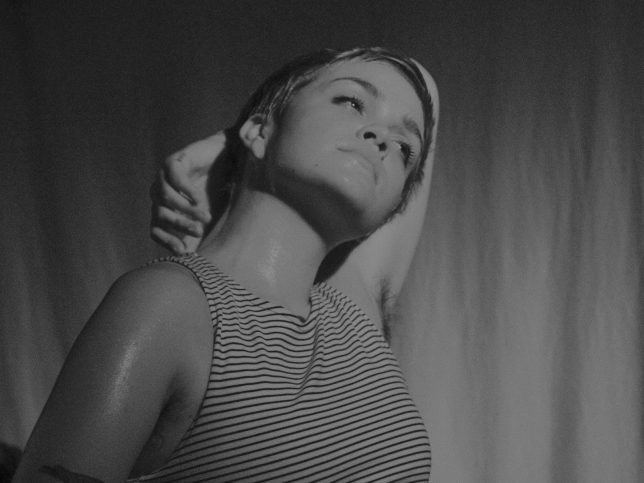 Guest Blogger Meredith Graves is the frontwoman of Perfect Pussy and label boss of Honor Press, as well as an anchor at the revamped MTV News where she reports on issues in race and feminism. This piece originally appeared at Watt and is reposted here via a Creative Commons CC-BY license.

By 8 o’clock in the morning, I am already out of bed, medicated, overcaffeinated and briefed on my day. I’ve got three or four written pieces due in the next 48 hours. Half of them I haven’t started, including one that requires meticulous baking and a photoshoot. I also have a research and development meeting and two scheduled phone calls. There are no groceries in the house and I have a friend in a crisis, a dinner for 15 to host in the next three days; my artists are emailing with questions about their upcoming releases and commitments I made a month ago that I cannot feasibly attend to—except that I have to.

This is an example of a bad day, or, at least, a difficult one. I have two of these, at minimum, a week unless I put an unbelievable amount of time into holding my shit together. (This usually feels like spinning a plate with one hand while taking a Jenga turn with the other and I am getting a Brazilian wax all at the same time.)

Add a nine-hour drive to the next city, and freelance work is the last thing you want to do.

In addition to being a member of a touring band, a full-time freelance culture writer and columnist, owner-operator of a small record label (a subsidiary of a big, real one), and now a food writer and baker, I am also sometimes a DJ, a moderator or speaker on panels as well as at colleges, a model, a record-shop employee, a radio and television personality, event coordinator—the list goes on.

A day in my life goes something like this: I start with a business call about hosting a charity event and punk show. There are emails from editors to respond to about accepted pitches and then scheduling writing these assignments before they are due. Then I have to menu plan a dinner party. A two-hour meeting is bookended by three “free hours” of writing and two hours of transcribing interview tape. Later, I’ll outline a story due three days from now and confirm all my appointments for the next day. I will go to bed by midnight.

The day I just described? Today. A completely average, rainy day. Honestly, a pretty good day. It’s 2pm and I haven’t had to put makeup on or leave the house yet. I’m drinking my fifth cup of coffee at my kitchen table in my peaceful home that I share with my boyfriend and our roommate. All three of us, coincidentally, freelance.

I go to sleep at night knowing I get paid to write about cake and feminism, and occasionally, I get paid to fly to Australia and scream. But when people ask what I do, I just tell them the latter, that I’m in a band. It’s easier than explaining all of the above. If I do make the effort to explain the intricacies of my survival, even to the genuinely curious, it will inevitably end with them fighting not to roll their eyes. How hard it must be, they think, having your makeup done, DJing small nights at quiet bars and getting fan letters.

That’s a reasonable assessment, and I’d never condemn anyone for rolling their eyes at a position no one could understand if they don’t live it, too. My job is the best, and the worst, in the world. But it might be easier to dispel some of the more common misconceptions people seem to have about what I do by more than just explaining my daily schedule.

Pitchfork and Rolling Stone liking your band does not mean it is lucrative. At all. Musicians do not get paid to do interviews or photoshoots. Press does not necessarily mean you’re getting paid because the cost of selling enough records to cover the cost of making one in the first place is insane. Our band’s only record came out in April 2014 and I still have not seen royalties or money from streaming. That, by the way, is totally normal.

Most listeners access nearly 100% of the music they listen to free. When people are expected to pay for music, they unleash a tidal wave of anger and contempt. I understand this as both a musician and a listener.

The only money our band makes comes from touring: playing shows and selling our records. We would split what’s left five ways after paying for our rental van (we never had enough money at once to put a downpayment on a van of our own), gas, housing, feeding ourselves every day, replacing broken equipment, flights if we’re going overseas, tour managers in countries where we can’t speak the language or legally drive, and a backline. It’s exciting to be paid at all for making music, so even if you make $300-400 from a four-week tour, you still feel like you succeeded. That’s a couple months of groceries if you play your cards right and shop frugally.

Being in a full-time touring band makes it almost impossible to hold down a job when you are home. That’s why so many touring musicians resort to low-paying restaurant or retail work. No job that provides benefits or tenure would hire someone who intends to be gone six months out of the year. And if you use the pump-and-dump employment, eventually there will be so many gaps in your résumé, even getting a temporary job will become nearly impossible.

You can also take matters into your own and freelance—a choice that’s already difficult for me, seeing as I’m a lazy employee and a neurotic boss. Even though you can probably keep up with it, freelancing is ostensibly more difficult when you’re on the road. You’re an exhausted, usually sick, zombie from playing shows every night for four weeks. Your time in hotels (if you can afford them) or anywhere with consistent wifi to do necessary research is limited to the second you check in at night to the early-morning van call. (And you’re usually checking in at three in the morning after load-out and a 45-minute drive outside of whatever city you just played—hotels are always cheaper near the airport.) Add a nine-hour drive to the next city, and freelance work is the last thing you want to do. If you manage to get anything done, the quality suffers because you’re exhausted, distracted and the majority of your energy is focused on the needs of everyone else in the van with you.

So, I’ll be straight with you: I have to budget $1,000 a month in rent plus massive, crippling amounts of student loan debt, groceries, utilities and public transportation. That adds up to a lot of work when it comes from a combination of freelance assignments that pay $50-300, gigs where I make $0-200 a pop, and my savings.

Before you say, “Well, you choose to live in New York City and it’s very expensive there,” I’ll note that I didn’t have a career to speak of before I moved here. In my previous lives, I have been a bartender, a retail employee and a seamstress. I have no qualifications to hold down a real job, and I have never made more than $11K a year. I am not ashamed of this. You are batshit insane if you think I would trade DJing, lecturing at colleges, and writing for The New York Times to go back to a life of working 40-60 hours a week (and more often than not, working two jobs at once) so someone else who yells at me every day can not only profit but own multiple businesses and properties.

I am consensually working these long-ass, impossible hours to be paid in less money, but more freedom. No, it doesn’t always feel amazing to put three days of work into a written piece for which I’ll make $50, but it feels exponentially better than having to clean up after vomiting 22-year-olds who sit at my bar spewing racist jokes to each other. It feels much better when a 16-year-old girl emails me to say that my writing made me her feel better or that listening to my record helps her with trouble at home or in school.

It feels amazing to be respected for the career I’ve chosen—the career of being myself.

I love to make my own schedule, to overcommit to projects that excite me and make me feel like I’m part of something, to book shows and bring my friends’ bands to town and to help people put their records out. It feels great to control the whole operation from the means of production up.

Yeah, I’ve been known to tear up in the grocery store. I am overwhelmed by the cost of food, which should be a right, not a privilege. I resist the urge to break it down to words-per-head-of-lettuce. I smile at the kids who work the checkout and chat them up, knowing how frustrating it is to work long hours in retail. I smile internally about the fact that per hour, they definitely make more money than I do. I get home, I stock my shelves and my fridge, and I exhale, because I bought those groceries with money I earned writing about feminism, about art, about social justice.

I earned that money the night I got bottled on stage in Switzerland; I earn that money introducing writer friends to editor friends to assure people with our kind of politics can be printed in places where we’ll have readers and influence. My friends get me paid, and I get my friends paid. We have all consented to this, and we work every day to make it better for ourselves and each other, and for the next generation of artists and writers.

Yes, I am fucking tired from doggy-paddling the length and depth of these long, complicated days. But I swim, because I would rather persist than drown, and because I know that since I am my own life raft, once in awhile, when the rapids abate, I can kick up my heels and float.