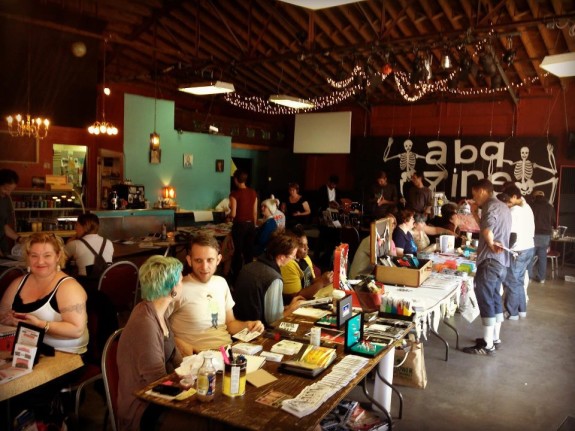 I thought about starting this post off with something along the lines of, “It ain’t easy being an artist.”

Then I thought I’d go the other way: “Being an artist is about the easiest thing I’ve ever done.” The fact of the matter is I have no way of knowing whether or not it’s easy. I’ve just, sort of, always been an artist, so I don’t know what it’s like NOT to be one. Is it easy? Is it hard? Both, I guess. But I will say this: making money as an artist is pretty tough. That is one thing I do know for a fact.

I’ve had an interest in all forms of art for as long as I can remember. And when I say “art,” I pretty much mean anything creative. Music, writing, painting, film, photography, baking, knitting, and so on. I’ve known artists of all different genres, and I’ve seen some of them make a lot of money at it, while others not so much. There are, of course, a number of reasons it goes one way or another. A person’s skill level, medium, location and connections all factor in.

But all that stuff aside, the single most important thing you gotta learn is the art of the hustle.

What do I mean when I say “hustle?” Think back to high school sports (as painful as that might be for some of us). Now, I wasn’t too gifted when it came to sports, but when my coach told me to hustle, I did. I ran as hard as I could, I went until I heard a whistle, and I gave it my all. Sounds cheesy, right? Well, that’s how you get playing time when you’re a slow, short kid who just moved to town. I wasn’t the fastest, and my dad wasn’t the coach, but I always tried my hardest.

Think about your art. What are you doing to sell it? To move it? If you’re in a band, then mail out some demos, and pass out some fliers. If you’re a writer, start submitting. If you do paintings, get on the damned street and sell a few. Don’t be afraid to be confident. Fake it ’til you make it! Stand out there, a painting in each hand, and ask people to look at them. Every 10 people that walk by, get one of them to look at your stuff. Every five people that look, get one to buy. That’s it. If you’ve never heard of Sharkula, then take a lesson. That guy is out on the streets of Chicago selling CDs every day.

And don’t be afraid to take on other jobs.

Don’t be ashamed. Take any job that will pay the rent, then look for one that is more in tune with your field. Every filmmaker I’ve ever known has shot wedding videos, every illustrator I’ve ever known has drawn logos for corporate assholes. So what? If you can get paid to use your skills, DO IT.

Do what you love, and just keep doing it. But then fire yourself up and get everyone around you to notice, as well. Art, no matter how good it is, can’t sell itself. You have to be your own first agent, and your own biggest fan. Be humble, but be confident. You must think what you’re doing is pretty cool, right? So tell us why.