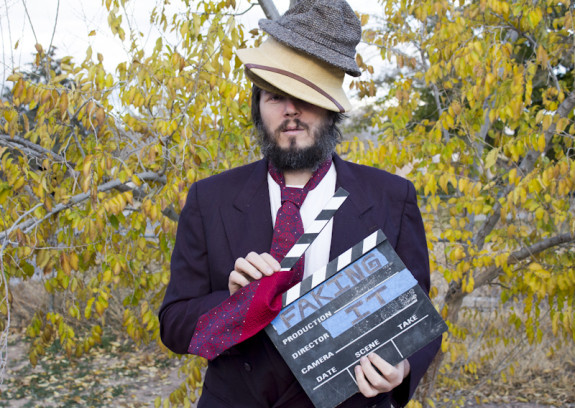 You’ve likely heard “fake it until you make it.” However, I am here to tell you to fake it and then fake it some more.

After a sleepless flight from New Mexico, jetlag, bone-chilling rain and less-than-ideal hotel arrangements, I found myself living off free espresso in the VIP lounge at Germany’s Oldenburg Film Festival.

Unlike other festivals, the filmmakers I met there were not only awkward but unfriendly. I was surrounded by producers and directors pitching their ideas and films to one another, and completely ignoring anything the other said. While all this illuminated the desperation you find in the Biz, something an obnoxious German director said stuck with me. He asked an American filmmaker if his producer “was a faker, or the real thing.”

The American quickly responded, “He’s the real thing. He’s a fantastic producer!” I couldn’t help but chuckle to myself. Not because the producer was untalented, but at the silliness of the question.

His answer should have been, “Yes, of course he’s a faker.”

Let me tell you why.

As a creative of any variety, you learn the telltale psychological signs of an artist. You crawl out of bed, look in the mirror and tell yourself, “You’re a big, fat fake.” Then you pour your coffee or tea, get on the computer and go to work writing a successful (but more likely failed) screenplay, poem, song, suicide note, etc. You can be as famous or successful as you want, but you will always have to fake it. Why? Because you are not a thing or an occupation. You’re a human being.

When sociologists talk about secondary socialization they’re referring to learned traits in life: what people learn through the observation of others, the non-biologicals. Studies tell us that as you gravitate toward a career, or what you want to be or do, you start acting the part. Whether that means dressing in a suit, carrying yourself a certain way or acting like a snobby indie-film director, you’re performing.

But you can’t just be a faker; people expect you to act the role as well.

The hard part: It requires pretending. And just like acting, it’s harder to sell yourself on a part than anyone else. As Neil Gaiman shared with a the University of the Arts class of 2012: “If you cannot be wise, pretend to be someone who is wise, and then just behave like they would.” Ask yourself, how does a producer with fantastic people skills act? The most talented people I’ve ever met struggle with this, whereas the most successful become experts at playing make-believe. This doesn’t make them great artists, but usually more successful ones.

My mother always told me, “If you wanna lay bricks for a living, do it. Because you will always find a way to succeed doing something you love.” I learned later that if you want to lay those initial bricks, you must also approach every opportunity to do so with passion and confidence.

Never say, “I don’t have much experience laying bricks, but I could do the job.”

Don’t qualify your skills and never ever start a sentence describing yourself with a negative; you can do the job, or you cannot. So why not pretend to be fearless and give your dream job a try? Not sure you can do it? There are tutorials online for everything.

First, fake it to find confidence in yourself; second, do it because you’re in love with what you do. Fake it through “success,” and unto death. Humorist Robert Benchley famously said, “It took me 15 years to realize I had no talent for writing, but I couldn’t give it up because by that time I was already famous.”

There’s always going to be someone better at what you do, and just like you, they will question their abilities. So keep writing, filmmaking, painting or whatever it is you do. Pretend to be the artist you most admire, and surpass them. Remember that if you can’t convince yourself that you should be doing something, how the hell are you going to convince someone else?

I leave you, again, in Neil Gaiman’s capable hands.