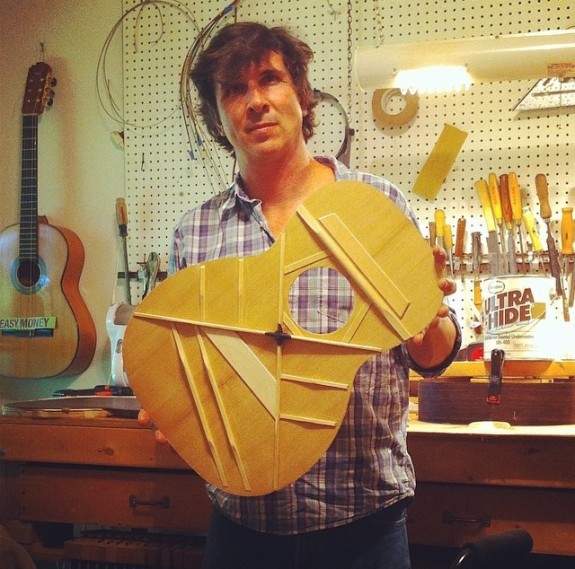 Hello there, my name is Noel McKay. I write songs. I travel a lot and play them wherever I can. My songs have taken me all over the world and I wouldn’t trade professions with anybody no matter how much prestige it might give or how much dough it might make.

When I was a 23-year-old songwriter I was playing a festival in Texas (which is where I grew up) and the headliners were Guy Clark and Townes Van Zandt. I was playing the show with my brother and after our set, Guy Clark came backstage and said how much he enjoyed what we did. He liked one of my songs in particular and wanted me to mail every song I had recorded to him at his home in Nashville, Tennessee. I remember him as being this huge, towering guy with Lee Press-on Nails on his right hand for guitar picking.
So I mailed him a cassette tape and he tried (unsuccessfully) to get a record deal for my brother and me.

As time passed I kept in touch with Guy and he would get me into his shows for free so I’d see him when he came to Austin or Bandera or San Antonio.

I think Guy thought I wasn’t that serious about the guitar.

In more recent years, my brother and I, and then my duet and frequent songwriting partner Brennen Leigh and I, have opened lots of shows for him and his accompanist Verlon Thompson. I’ve also started to gravitate toward Nashville and in doing so have spent more time hanging out with Guy at his house.

We’ve written a few songs together, one of which, the song “El Coyote,” is on his record My Favorite Picture Of You. That record won Guy his first Grammy this past January.

As you probably know, Guy is a legendary songwriter. World famous, revered, respected, all that stuff. Something you may not know about him is that he’s a master guitar builder in the old world, old school fashion.

So, a little more than a year ago, Guy and I started building a guitar and that’s what I’d really like to talk to you about.

Around January 2012, I was in Nashville, sitting around the table with Guy, his wife Susanna, and Brennen Leigh, and Guy says, “So you wanna build a guitar, huh?”

So we set about planning it out but it didn’t get started in earnest for a little more than a year. 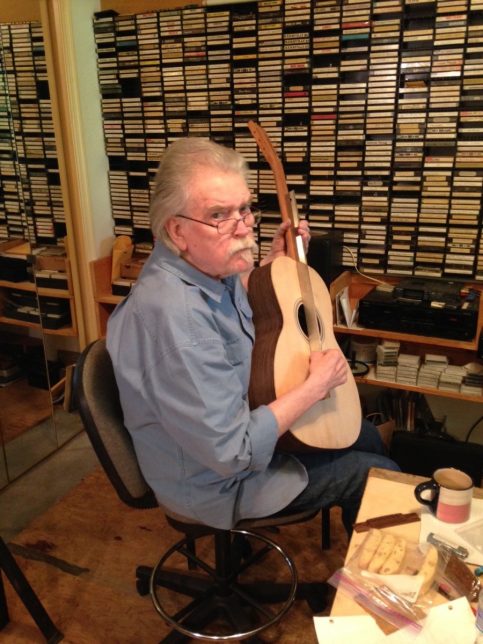 That June we were back visiting Guy and Susanna. Susanna was particularly animated that day. We would bring them strawberry rhubarb pies from Texas and she called us “Brennen and the pie guy.” She would smoke a few Marlboro 100s and get on the oxygen tank for a while and repeat that a couple times and then take a nap with the TV on really loud.

So this particular day she was really engaged and talking more than usual. She talked a lot about how close she and Townes Van Zandt were and how much she missed him. How he was always there for her and called her every day. She said, “We just had a really strong connection.” Guy rolled his eyes and said sarcastically, “On a whole other level.” Brennen and I visited them for a while, told them we’d see them soon and left for a long tour of Norway. Four days later, I got an email in Oslo that Susanna was dead. I waited a few days to call him because I knew the phone was probably ringing off the wall.

Paul said, “This is the same batch of spruce that Guy used in his #10 guitar.” I couldn’t believe my luck.

Via Skype I called him overseas and told him how sorry I was to hear about Susanna. He said, “It was a shock but not a surprise.” She had struggled with lung cancer for a very long time and lasted longer than most would have. She was sweet and funny and eccentric and crazy and still beautiful into her seventies…this way to the very end. She was a brilliant, world-renowned painter and a great songwriter in her own right. I know Guy misses her.

One day a few months later I was in Austin talking to some friends about wanting to save up the money for the materials to build the guitar and my friend Brian Atkinson said, “I’ll loan you the money, you have to do this!”

So I got some stuff from a catalogue and got some materials from the warehouse at Collings Guitars, where I used to work making bridges and pickguards for a year, and drove to Nashville to build my guitar.

We got the plans out and started plotting the first steps. When we left, I took the plans and the sides home and cut them to the correct size.

I was going to Nashville once a month or so so it was going pretty slowly for the first few months. Mostly he wanted to hear whatever new song Brennen or I had to play him or we’d write a song together. I think he thought I wasn’t that serious about the guitar. 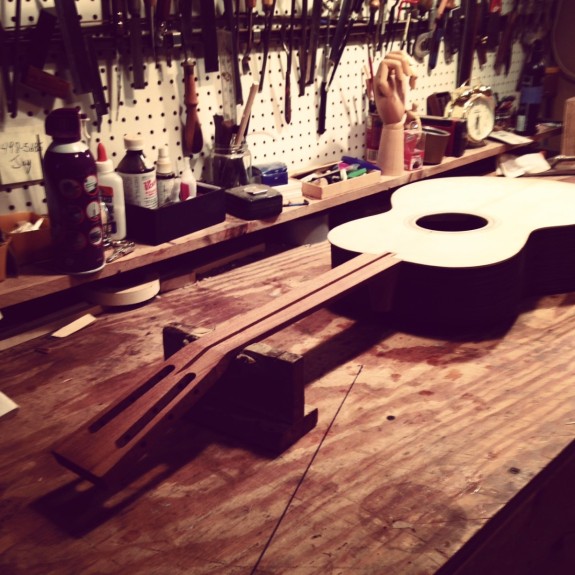 So please indulge me in talking a bit about the guitars Guy has built over the years. I know that he’s built and given away quite a few but the ones he has around the house are: #1, #4 and #5. These are all nylon-string classical or flamenco-style guitars that were built entirely from scratch without the benefit of a kit or prefab parts. I played #4 for the lead part on “El Coyote” on Guy’s record. Also around the house are #10 which is, hands down, the best sounding guitar I have ever heard or played; and #11 which is the one he plays at shows. It has a custom size bridge to accommodate a McClish pickup system. And #13 which has had problems from the day it was built because the bridge keeps coming loose from the top.

The #10, #11 and #13 are steel-string 000-style guitars made from parts in a mail order kit. The #10 being a slight exception in that its top is made from a piece of German spruce given to him by his close friend and brilliant mad scientist luthier Paul McGill. The back and top were, apparently, too thick and needed to be planed down. Guy said that we should use Paul McGill’s planing sander.

Paul was really cool and patient with my lack of expertise. He planed the joint of the rosewood back and glued it together for me. He planed it down to a certain thickness, handed me the caliper to measure it and said, “You do the rest.” I really did not want to mess it up so I was very nervous but somehow managed to get it done correctly. He took a look at my top material which was Sitka spruce and said, “I don’t know if you’ve got enough good wood here for a triple O. A double O (which is a smaller guitar) maybe.

He said, “I usually don’t do this but I have an old piece of German spruce that’s been laying around for a long time. Would you like to have it for this guitar?” I said, “Are you kidding? Of course.” He said, “This is the same batch of spruce that Guy used in his #10 guitar.” I couldn’t believe my luck. If my guitar sounded even a fraction as good as #10 it would be out of this world. I was really happy.

Paul was about to show me how to do a neck reset on an old Martin and I was really wanting to learn, but Guy was exhausted and ready to go so I thanked Paul profusely, we drove back over to Guy’s house, he collapsed in his chair, I said goodbye and thanks and drove myself home in a happy daze.

So next time Guy and I will be bending the sides, installing the rosette, gluing in the tail and neck blocks and..something goes horribly wrong with that amazing German Spruce top. Can we save it? Log in, tune in, and see.